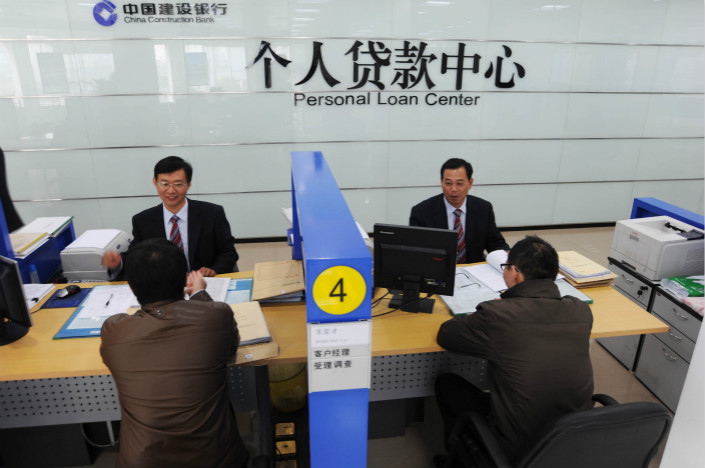 A China Construction Bank personal-loan center is seen at a bank branch in Haian, Jiangsu province, on Oct. 21. Photo: VCG

China Construction Bank (CCB) reported a 157% jump in personal consumer loans last year, driven by the popularity of its online short-term lending business, but regulators are calling for vigilance over the rapid growth in loans to retail customers.

The country’s second-largest lender saw loans for consumer goods and services such as automobiles, housing renovation, education and travel increase by 117.6 billion yuan ($18.69 billion) to 192.7 billion yuan in 2017, according to its annual earnings report released on Tuesday.

But the growth was accounted for entirely by CCB Kuaidai (Quick Loans), an online platform offering credit of 1,000 to 30,000 yuan for up to a year at an annualized interest rate of about 7%. Kuaidai’s outstanding loans at the end of 2017 amounted to 156.3 billion yuan, up from 28.8 billion yuan at the end of 2016.

CCB Kuaidai’s share of the bank’s total lending more than doubled last year, although it still accounts for only 1.49% of CCB’s 12.9 trillion yuan in outstanding loans and 3% of its overall consumer loans. CCB President Wang Zuji told Caixin this week that the bank had strict requirements for customers wanting to take out a loan via the platform. Borrowers must prove they have a clear use for the loans, so it is very difficult for them to use the funds inappropriately, he said. To control risks, the product is offered only to customers that already have deposits at the bank.

Growth in consumer debt has raised concerns among regulators who are under orders to rein in financial risk. Outstanding loans to households jumped by 21.4% last year, almost double the pace of growth in overall loans, central bank data show. Household debt as a percentage of gross domestic product jumped to 49% last year, up from 38.7% in 2016.

The growth in personal debt has been driven by an explosion in online lending, both in the form of peer-to-peer lenders such as Ppdai.com and Jiedaibao, which offer small short-term loans at far higher rates than ordinary bank loans and with fewer checks into borrowers’ creditworthiness than established bricks and mortar banks conduct. Traditional lenders like CCB have also started to enter the market, seeing the opportunity to grab new business.

But regulators have become increasingly concerned by some of the shadier practices of the online lending sector, especially the lack of credit checks, the debt collection methods and high interest rates. They have been working to clean up the industry and have launched periodic crackdowns to squeeze out risks.

Guo Shuqing, the head of the newly merged China Banking and Insurance Regulatory Commission, reiterated his concern at the National People’s Congress earlier this month and said that increased vigilance was necessary.

“The amount of loans households take out for consumption, housing, and investment are growing rapidly,” Guo said. “This is very risky. A high savings rate used to be a great strength for our country. If lending rises more than savings, we will lose our advantage of having a high savings rate.”