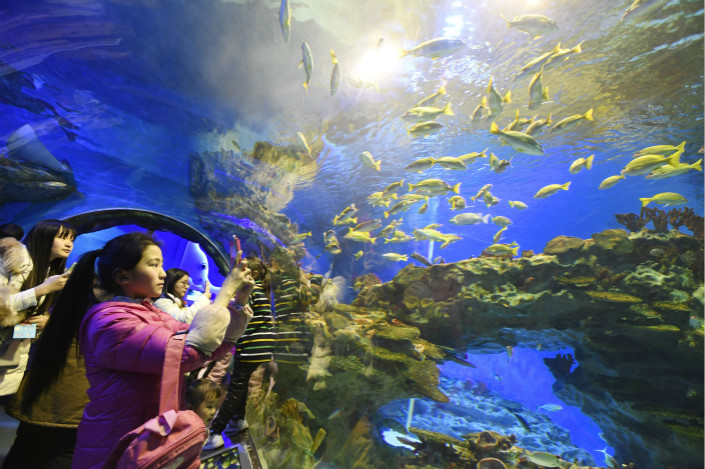 A new Shanghai theme park developed by a Chinese company just a half-hour drive from the city’s Disney Resort is set to open this summer ­— but the operator claims not to be worried about competition from Mickey Mouse.

After three years of construction, Shanghai Haichang Polar Ocean Park will open its gates to visitors in the coming months. The 5 billion yuan ($795 million) project, which will offer wildlife exhibits, aquariums and other nautical-themed amusements, covers an area of nearly 30 hectares (74.1 acres) and is located beside a lake in eastern Shanghai, according to a statement by Haichang Ocean Park Holdings Ltd.

The park is dwarfed by the nearby Disney destination, which is 12 times larger and cost $5.5 billion to build.

As one of the most anticipated tourism and entertainment projects in China, the Shanghai Disney Resort welcomed its 10-millionth guest just 11 months after opening in June 2016.

The operator expects Haichang Ocean Park will receive around 3 million visitors in its debut year, which will eventually grow to around 5 million to 6 million visits per year.

Haichang aims to cooperate with, rather than compete against, other theme parks in Shanghai, the park’s president told Chinese media outlet the 21st Century Business Herald. Wang Wei said that Haichang and Disney can act as a pair of engines, to drive forward Shanghai’s tourism industry together.

Wang said Haichang even had its staff trained by the former managers of the Tokyo Disney Resort — the first Disney park in Asia.

The Shanghai Haichang Polar Ocean Park will benefit if the visitors to the Disney park overflow, as tourists may want to try out another theme park in a convenient location, while others may want to enjoy a different kind of experience from that offered by Disney, said Wang Qiang, an analyst from securities firm Essence International.

Haichang Ocean Park operates eight projects in China. Besides the one in Shanghai, another park in Sanya, a resort city on the tropical island province of Hainan, is scheduled to open by the end of this year.

As disposable incomes rise in the world’s most populous nation, China is expected to surpass the U.S. as the world’s largest theme park market by 2020, when the country’s parks will attract an estimated 221 million people a year, according to U.S. consulting firm AECOM.

Given this market potential, both foreign and domestic park operators are planning to launch new projects in the country. Universal Studios is building a Beijing park, which is set to open in 2020, and both U.S. amusement park operator Six Flags and toymaker Lego Group have begun building theme parks in China too.

Chinese developers, including Chimelong, Wanda Group and Happy Valley — which dominated the market before Disney’s arrival — are also increasing their presence. Even a little-known Chinese outfit wants to jump on the bandwagon. In October, China UniCreative Group announced plans to link up with “a Hollywood team” and invest hundreds of billions of yuan in several “theme towns” featuring “world-class” intellectual property rights in the coming years.