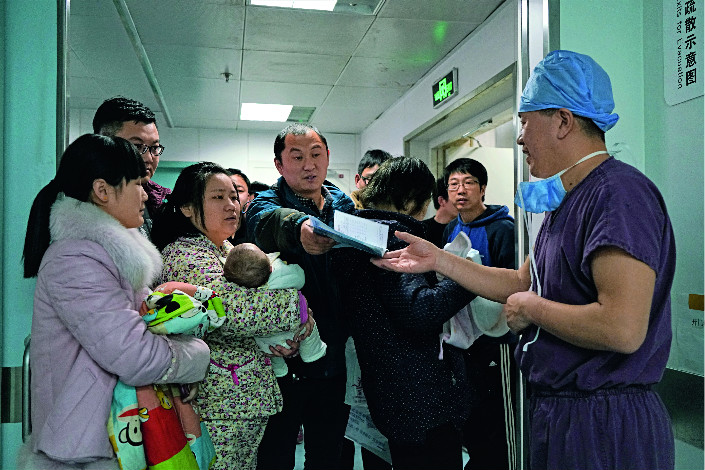 Li Long, a senior pediatrician at Children’s Hospital of the Capital Institute of Pediatrics, a top pediatric facility in Beijing, is mobbed by a group of anxious parents seeking his advice as he emerges from an operating room on March 12.

Li Long arrived in his hometown of Anshan, in the northeastern province of Liaoning, around 7 p.m. on Feb. 15 — the eve of the Lunar New Year — for an annual reunion with his family.

But Li, a veteran surgeon with Children’s Hospital of the Capital Institute of Pediatrics in Beijing, was already on his way back to the Chinese capital early the following morning after he received an urgent call that emergency surgery was necessary for a baby born with a life-threatening pulmonary tumor.

Vacations cut short and frequent overtime is nothing new for the veteran surgeon and many other pediatricians amid an exodus of staff at Chinese pediatric facilities because of low pay and long hours.

Li and the other 28 surgeons at the hospital’s general surgery unit each need to care for an average of 30 patients at a time, compared with six patients for pediatricians in developed countries. Their inpatient ward at the unit, designed for 45 beds, is now crammed with 100 patients, and the hospital has to turn away many more, Li said.

Most hospitals in China, including pediatric facilities, are publicly run. Regulators keep a tight grip over headcounts, how much medical employees get paid, and how much patients are charged for most medications and services.

Li, who has been with the children’s hospital — one of the top pediatric facilities in China — for more than three decades, said he often starts his shift at 7 a.m. and doesn’t finish until 8-9 p.m., with five operations in between.

Overtime is a fact of life for many doctors like Li and nurses at the pediatric hospital, and many work an extra month in accumulated overtime a year, according to hospital management.

Full-time employees in China are required by law to work no more than 40 hours a week, but many public hospitals, particularly publicly run pediatric facilities, have flouted the law due to limited staffing and a shortage of trained doctors. As a result, medical staff members are frequently required to work overtime.

Nurses at the Beijing children’s hospital earn overtime pay of 2 yuan (32 U.S. cents) per hour, while other employers in the city were required last year to pay workers at least 11.49 yuan per hour for overtime.

Ju Wenqian, a contract nurse at the Beijing children’s hospital, earns about 6,000 yuan a month, including overtime pay. That is several thousand yuan short of what one of her former schoolmates is paid at a privately run gynecological hospital in Beijing. The ex-schoolmate works only 40 hours a week, as required by law, she said.

Ju said that she spends a third of her salary to pay rent for her apartment in Beijing’s Changping district, about a 90-minute ride on public transportation from the hospital.

Pediatricians get paid a third of doctors in other medical divisions, according to Li. Pediatricians prescribe medicines and medical services on children less often than specialists who deal with adult patients, meaning pediatric divisions make far less money, Li said.

Nearly 100 new pediatricians were recruited by Children’s Hospital back in 1985 when he first joined the hospital, but about 80 had left by 2005, Li said. Another 30, including some recruited after 2005, quit for higher-paying jobs such as sales representatives for pharmaceutical companies and workers at facilities offering cosmetics surgeries “because trained pediatricians are particularly good at surgical stitching,” he said.

The shortage in pediatricians was exacerbated by a move in 1998 by China’s Ministry of Education to drop the pediatrics major in Chinese medical colleges and make it a subject for students majoring in clinical medicine. But many graduates shunned work in pediatrics over the low pay and mandatory overtime, Li said.

To tackle the problem, the National Health and Family Planning Commission in 2015 sought to woo young doctors to children’s hospitals by offering them extra credits in accreditation tests if they chose to work as pediatricians. However, the program has received only a lukewarm response.

“Such measures didn’t serve to solve the fundamental problem, and the issue at hand is that the government has not paid much attention to development of pediatrics and failed to give children’s hospitals and pediatricians the resources they deserve,” Li said.

A Caixin photographer recently spent several days with Li and Ju, capturing moments of the pair at work.