By Liang Jialin and Coco Feng 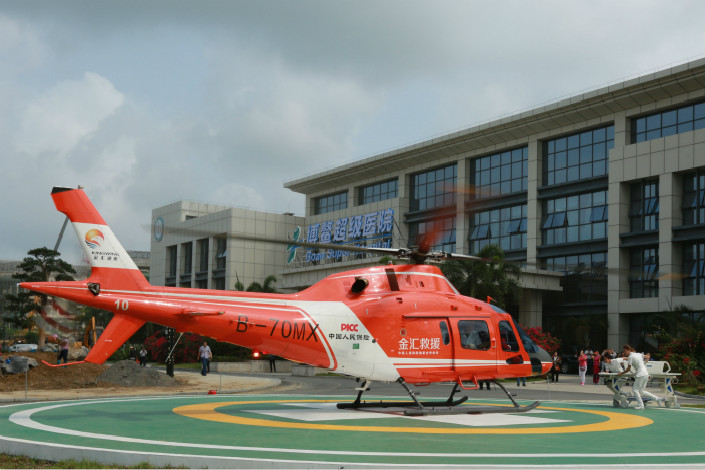 *Hospital is the renovated and renamed Chengmei International Medical Center

(Beijing) — A “super hospital” opened in China over the weekend, offering access to drugs that aren’t available domestically at a time that a growing number of Chinese are traveling abroad for treatment.

The Boao Super Hospital is in a pilot health care zone in Boao, South China’s Hainan province. The hospital offers speedy importation of foreign drugs and medical devices, as well as three-year visas for overseas doctors instead of the usual one-year visas.

For example, one item provided by the hospital that is unavailable elsewhere in China is a vaccine that contains nine human papillomavirus (HPV) antigens, Hainan Governor Shen Xiaoming said.

Another version of the vaccine that guards against the sexually transmitted HPV, which can lead to cancers of the cervix, genitals and throat, was launched last year in the Chinese mainland but contains only four HPV antigens.

The Boao Super Hospital is not a new structure, but a renovated and renamed Chengmei International Medical Center. The center was one of the first seven medical-care institutions that was launched in the Boao pilot zone following its establishment in 2013.

However, some of the supportive policies, such as speedy importation of foreign drugs, weren’t fully implemented at the time. For example, Chengmei International Medical Center once hired a Hong Kong-based pharmacist to purchase some foreign drugs and import them to the Chinese mainland, but the pharmacist encountered some trouble at customs. It took half a year for the products to eventually arrive at the center.

In addition, more policy changes will soon take place to facilitate access to foreign health care products. For example, the national drug regulator will grant the Hainan government the right to independently approve imports of medical devices, Caixin has learned.

These supportive policies will not only be applied to the new hospital, but also other health care institutions operating in the zone, including a hospital backed by property giant Evergrande Group.

The zone aims to attract wealthier Chinese who may otherwise go overseas for treatment.

Bi said that in the past decade, major new drugs have become available in China five to seven years later than in other countries.

The absence of some new medicines and health care technologies in China has led to many Chinese traveling abroad for cutting-edge services. The number of Chinese booking outbound trips for health purposes on travel site Ctrip.com alone grew by five times to more than 500,000 in 2016 from just a year before, according to Ctrip.

The top destinations were Japan, South Korea and the U.S., Ctrip said.

“The Boao Super Hospital may help boost health care tourism in Hainan,” said Lü Xiaolei, an official from Hainan’s health care authority, who added that the zone may attract tourists from countries along the “Belt and Road” corridor as well.