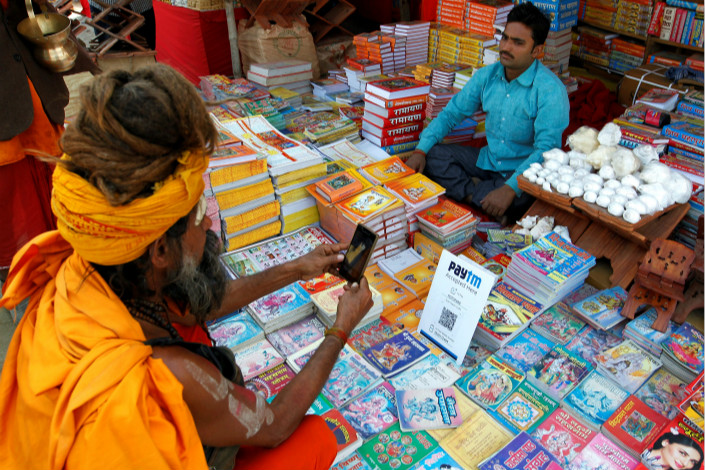 A customer pays for his purchase with Paytm in Allahabad, India, in January 2017. Photo: VCG

Paytm, which counts Alibaba as one of its largest stakeholders following several earlier investments, confirmed the last cash infusion into its e-commerce Paytm Mall unit, but declined to provide any financial details.

“We are committed to increasing the business growth for the offline merchants, who serve their customers daily. The funds will be deployed for empowering the shopkeepers with technology, building superior logistics, strengthening the Paytm Mall brand and bringing an enriching experience to the customers.”

Paytm operates an electronic payment service as well as an e-commerce mall, using a similar hybrid to Alibaba’s own popular online malls and its affiliated Alipay online payments unit. The new investment will value that asset at between $1.6 billion and $2 billion, according to a report in Indian business publication Mint.

The latest investment totaled about $450 million, with Softbank putting up about $400 million of that and Alibaba providing the rest, Mint said.

Alibaba has been a longtime investor in Paytm, with contributions dating back to 2015. In one of the recent investments, Alibaba provided $177 million last year to Paytm E-Commerce, the online retail arm of Paytm. Before that, Alibaba and its Ant Financial Services Group affiliate had invested more than $500 million Paytm for 40% of the company.

Alibaba’s stepped-up collaboration also comes as leading U.S. retailers Walmart Inc. and Amazon.com Inc. may be vying for control of Indian e-commerce leader Flipkart, Mint reported on Wednesday. The publication cited sources as saying Flipkart was in advanced talks to sell a majority stake to Walmart, but that Amazon was also weighing making a rival bid.