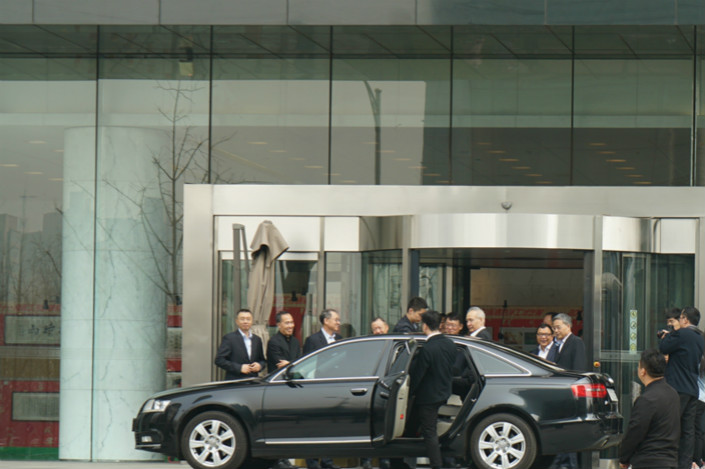 Vice Premier Liu He, third from right behind the car, leaves for a session of China's annual "Two Meetings" in Beijing on March 27, 2018. Photo: Cai Yingli/Caixin

Soon after Zhou Xiaochuan, the then-party secretary and governor of China’s central bank, finished his journey to Buenos Aires, Argentina, last month for the G-20 meeting of finance ministers and central bank governors, he ended his 15-year career at the post.

On March 26, Zhou hosted a meeting of senior officials of the People’s Bank of China (PBOC), in which Guo Shuqing, the head of China’s new banking and insurance regulator, was named the party secretary of the PBOC. Just a week ago, then-PBOC Deputy Governor Yi Gang was named the new governor of the central bank.

Over the years, division and mutual isolation had been pronounced between the central bank and the former banking watchdog. The estrangement had become more profound as the country’s banking assets quadrupled over the course of 10 years to 250 trillion yuan ($39.7 trillion) by the end of 2017, bringing much more complicated businesses and risks to the financial industry.

The PBOC complained that the CBRC failed to tame burgeoning off-balance-sheet activities and was reluctant to share its data, while the then-banking watchdog grumbled that the PBOC should have given up the credit scale as a scheduled indicator under the circumstance of quantitative easing, and that the CBRC had fewer regulatory resources than the PBOC, Caixin has learned from sources close to the agencies.

Market participants have high expectations for the new personnel arrangement. Guo and Yi both have reputations of being among China’s most reform-minded officials with solid academic backgrounds. Yu Yongding, a senior economic adviser to the government and a former monetary policy adviser of the PBOC, describes them as “decent people.” Yu has an optimistic expectation of their close cooperation.

In addition, the central bank will take over the role of drafting key regulations and designing basic rules for prudential oversight for the banking and insurance industries. One example of improving coordination is that the PBOC has coordinated the formulation of regulations for financial holding companies and “shadow banking” activities, most of which take place via the trading of asset management products.

The 60-year-old Yi, a 21-year veteran of the PBOC, has a deep understanding of the evolution of China’s monetary policies. He was described by a top Chinese leader at a recent internal meeting as “an expert of the U.S. economic and financial system,” Caixin has learned.

After six years of study in the U.S. in the 1980s, he taught at Indiana University from 1986 to 1994 and became an associate professor with tenure there before he returned to China to join Peking University as a professor. His in-depth research into monetary policy gained the attention of top policymakers, so much so that he was invited to join the PBOC in 1997.

In addition to ensuring the continuity and stability of central bank policy, the multiple challenges that Yi faces include pushing forward the transformation of China’s monetary policy framework — from one based on quantitative control to one focused on price-based regulation, the reform and opening-up of the financial industry, the yuan’s internationalization, and the deleveraging campaign.

Yi told reporters on the sidelines of the national legislative session in March that a proper monetary policy should efficiently serve the real economy, and should benefit financial reform and risk control at the same time, helping the country shift its economic focus from high-speed growth to high-quality growth.

Besides, accelerating reforms of the exchange rate mechanism is widely expected. As a friend of Yi for many years, Yu, the economic adviser, hopes Yi will do his best to push through exchange rate reform. China has sacrificed a lot in order to maintain the stability of the yuan’s exchange rate, and now it’s time to make a change, Yu said.

Guo, 62, is well-known for his exceptional career among Chinese officials for its breadth of experience, which included positions in think tanks, local governments, financial institutions and regulatory agencies. He once served as PBOC deputy governor and headed the foreign exchange regulator, the China Securities Regulatory Commission (CSRC) and the CBRC.

Guo’s past has won him a reputation of high efficiency and impartiality. During his 17-month tenure as chairman of the CSRC, Guo introduced over 70 policy directives aimed at invigorating the market by reducing administrative interference and giving nonbank financial institutions more tools and services that they could offer to investors. When he was CBRC chairman, Guo rolled out a series of policies to crack down on shadow lending and to enhance supervision over the wealth management sector.

Now Guo has to take over more responsibilities, as the former banking and insurance regulators have been combined into a single regulatory agency. Guo told CBIRC officials at an internal meeting on March 21 that they should make sure institutional reform and daily regulatory operations are both stably pushed forward.

Another tough task for Guo is to tame debt-fueled financial conglomerates. Anbang Insurance Group was taken over by the CIRC. Others include Funde Sino Life Insurance Co., Tomorrow Holdings Group, and CEFC China Energy Ltd. Besides, Guo has to fix the loopholes and gaps in supervision that are often exploited by financial institutions.