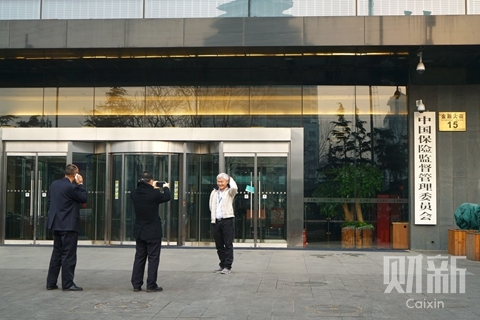 People pose for photos in front of the headquarters of China Insurance Regulatory Commission in Beijing. Photo: Caixin

(Beijing) — Merging the banking and insurance regulators and granting the central bank the power to draft the rules for the industries underscore China’s determination to streamline and strengthen oversight of the finance industry. But the success of the new arrangement depends on how much regulatory coordination and information-sharing can be improved, industry insiders say.

The government has long discussed the idea of restructuring the highly fragmented financial regulatory framework, which has struggled to keep up with the increasingly complicated business of the financial industry. The plan released on Tuesday is in line with the internal expectations of CBRC and CIRC, Caixin has learned.

Since the downfall of CIRC Chairman Xiang Junbo in April, the top post at the insurance regulator has been vacant, and the regulatory filings of CBRC and CIRC have grown to sound increasingly similar.

“CBRC officials will be in an advantageous position when it comes to some appointments because the CIRC people close to fallen Chairman Xiang won’t get a seat,” the official said. “But for positions overseeing insurance, the CBRC staff won’t have an advantage.”

An insurance regulatory official echoed that view, pointing out that the adjustment will be minor on positions that supervise insurance products since banking regulators don’t have the expertise. Major personnel changes after the merger are expected to take place in administrative departments, such as human resources and public relations, the official said.

Notably, the restructuring proposal, if approved, will strengthen the function of the People’s Bank of China (PBOC).

As PBOC Governor Zhou Xiaochuan said at a news conference on Friday, the PBOC will “play an even more important role” in China’s new financial regulatory framework as the National Financial Work Conference decided in July to set up the office of the new cabinet-level Financial Stability and Development Committee, dubbed the “super financial regulator,” within the central bank.

Handing over the power to draft regulations for the banking and insurance industries also means that the central bank will take the lead in a series of important changes going forward. Xu Zhong, head of the PBOC’s research department, interpreted the financial regulatory overhaul as a move that aims to effectively control systemic financial risks and maintain financial stability.

Zhang Jingchun, a former CBRC regulator who is now chief banking analyst at Everbright Securities Co., said, “China has proposed a hybrid regime that combines the regulations of different sectors and the ‘twin peaks’ regulatory model.”

The “twin peaks” model of financial regulation exists in countries like Australia and the U.K., which divide financial oversight between one watchdog for business and another for consumer protection.

“Regardless of what financial regulatory framework is put in place, the key (to its success) will be whether the model can facilitate information sharing and enhance coordination between regulators, as well as standardize regulation and realize seamless regulation,” Zhang said.

Jiang Yang, a CSRC vice chairman, told Caixin reporters on Tuesday that the securities watchdog won’t be involved into the reform this time. Several other NPC representatives also told Caixin that it is highly likely that the CSRC’s responsibilities will remain unchanged for now.

Although the matter hasn’t been addressed in the proposal, the CSRC could possibly take over more of an oversight role for the markets, said Gao Yinxin, president of Bank of China International, during a Tuesday group discussion of the National People’s Congress.

In fact, the flexibility for CSRC to draft powerful industrial policies will be squeezed in the future as the financial stability committee is set to take a leading role in unified regulations that covers all financial sectors, such as implementing tougher rules taming the country’s asset management industry.

A senior financier who declined to be named told Caixin that even if the CSRC remains a stand-alone agency under the new regulatory regime, it is urgent for China to move toward a unified financial regulatory system that allows data and information to be shared because the government is determined to crack down on all types of financial misconduct.