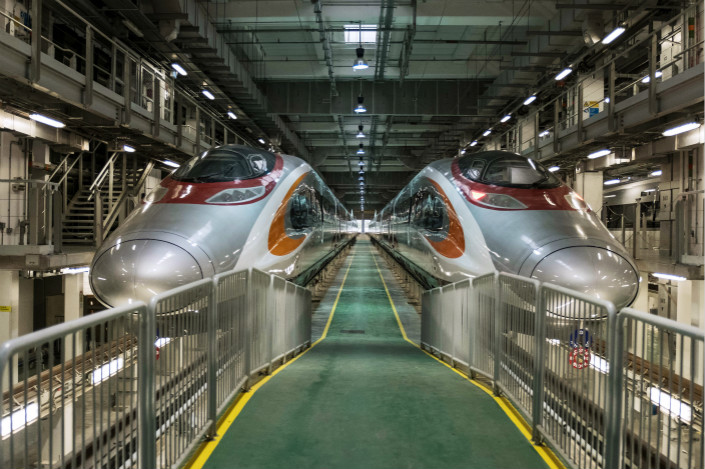 Two of the trains that will be used on the Guangzhou-Shenzhen-Hong Kong Express Rail Link stand in Hong Kong on Aug. 2, 2017. Photo: VCG

The recent derailment of a train car during a test run of the mainland-Hong Kong high-speed railway was probably caused by a track malfunction, Hong Kong’s rail service provider has said after an initial investigation.

Testing of the Hong Kong section of the Guangzhou-Shenzhen-Hong Kong Express Rail link began on Sunday. On Tuesday evening, train depot engineers found that the wheels of the test train’s last car had moved off the rails during a trial run earlier that day. No injuries related to the derailment were reported.

The derailment was likely caused by the deformation of a supporting structure and was not due to any fault in the mainland-built trains, Francis Li Shing-kee, head of operations at Hong Kong’s government-owned MTR Corporation, announced on Wednesday evening.

A small section of the I-beam, a weight-bearing support structure on the track, had “bent out of shape,” Li said. “When the train passed over the section, we suspect that some lateral forces may have been brought to the tracks.”

The trains that will be used on the railway after its commissioning, which were built in Qingdao by state-owned train-maker CRRC Corp., arrived in Hong Kong last year.

MTR Corporation is conducting a further investigation into the derailment, which comes just five months before the high-speed rail link’s expected opening in September. Hong Kong’s Transport and Housing Bureau will “verify whether the (MTR Corporation) has completed all safety tests and will also conduct on-site tests before approving the operation of the trains,” according to a government statement in response to the derailment.

When the high-speed rail link opens for operation, it will connect Guangzhou, the capital of China’s Guangdong province, with Hong Kong via 140 kilometers (87 miles) of railway track, with seven stations along the way. High-speed services are expected to cut the journey time between Hong Kong and its nearest mainland neighbor, Shenzhen, down to 14 minutes from the current 50.