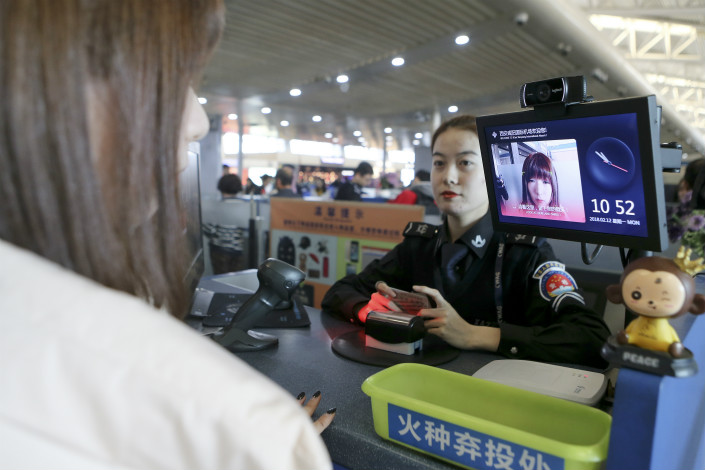 The development of artificial intelligence, such as the facial recognition software unveiled in Xi'an's Xianyang International Airport on Feb. 12 (pictured), is a significant part of China's strategy to upgrade its economy. Photo: VCG

Artificial intelligence (AI) company SenseTime said on Monday it has raised $600 million from a group led by e-commerce giant Alibaba, bringing its total funds raised to more than $1 billion as it cashes in on surging demand for its services.

Other members in the company’s third funding round include Singaporean sovereign wealth fund Temasek and Chinese retailing giant Suning, SenseTime said in a statement. SenseTime operates a supercomputing platform that lets users build models using hundreds of billions of parameters.

The latest funding follows SenseTime’s raising of $410 million last July in just its second capital-raising round.

“SenseTime has established an AI ecosystem anchored with robust research, deep industry collaboration, and diverse partnerships,” said CEO and co-founder Li Xu. “Our Round-C funding will maximize these advantages by accelerating the development of a global footprint with a larger ecosystem incorporating both domestic and overseas partners. The funding will also help us widen the scope for more industrial application of AI, thus increasing the value of SenseTime’s global ecosystem.”

China has been actively promoting the development of AI and other cutting-edge technologies as it encourages companies to move away from the country’s strength in low-end manufacturing and up the value chain to higher-margin services. China’s three leading internet companies, Alibaba, Tencent and Baidu, have all poured major resources into developing their AI capabilities.

“Our business at Alibaba is already seeing tangible benefits from our investments in AI and we are committed to further investment,” he said. “Our strategic partnership with SenseTime will spark more innovation and create value for society.”

Established in November 2014, SenseTime has emerged as a supplier to dozens of big-name firms, including Huawei Technologies Co. Ltd., China UnionPay and Dalian Wanda Group. The company, which has offices in Beijing and Shenzhen, saw its total number of clients rise tenfold to more than 400 in 2016 from a year before.