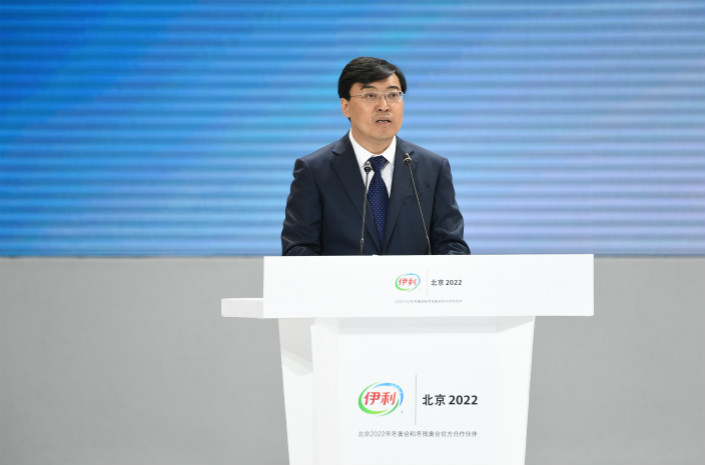 Pan Gang, chairman of Inner Mongolia Yili Industrial Group Co Ltd., speaks at a signing ceremony for the partnership between Yili and the 2022 Beijing Olympic and Paralympic Winter Games on Aug. 30. Photo: IC

Leading dairy Inner Mongolia Yili Industrial Group Co. Ltd. said its chairman is being treated for a heart condition abroad, shooting down earlier rumors that the top executive had been detained as part of an investigation.

Rumors on the whereabouts of Yili Chairman Pan Gang led to a sell-off of the company’s Shanghai-listed shares late last month, with the stock losing 13% of its value between March 20 and March 28. Pan had originally planned to attend the annual Boao Forum taking place this week in southern China’s Hainan province, but had to cancel due to health reasons, the company said.

Pan suffers from a condition called congenital coarctation of the aorta, characterized by a narrow aorta, which had been exacerbated recently by his long working hours, Yili said in a statement late Sunday on its website. He was originally being treated in China, but went abroad for more treatment at the urging of his friends, colleagues and family members, the statement said.

“Some unscrupulous people took advantage of this publicly available information to reverse black and white, distorting the facts. Using a well-organized plan with conspiratorial intent, they created a series of rumors saying he was ‘taken away to assist with an investigation,’” Yili said, referring to a commonly used phrasing that often means a person is being investigated for corruption or other financial crimes.

Yili said six suspects had been detained in connection with the case.

Two of those were journalists from Beijing, including Zou Guangxiang, who formerly worked for the 21st Century Business Herald, one of China’s leading financial publications, the South China Morning Post reported. Based in South China’s Guangdong province, the 21st Century Business Herald landed at the heart of a similar scandal in 2015 after police arrested several workers at its website for threatening companies with publication of negative stories unless they paid a fee.

Such practices are relatively common in China, undermining the credibility of the media.

On Friday, the U.S.-based Committee to Protect Journalists called for Zou’s release and said the authorities should stop the harassment of reporters for doing their job.