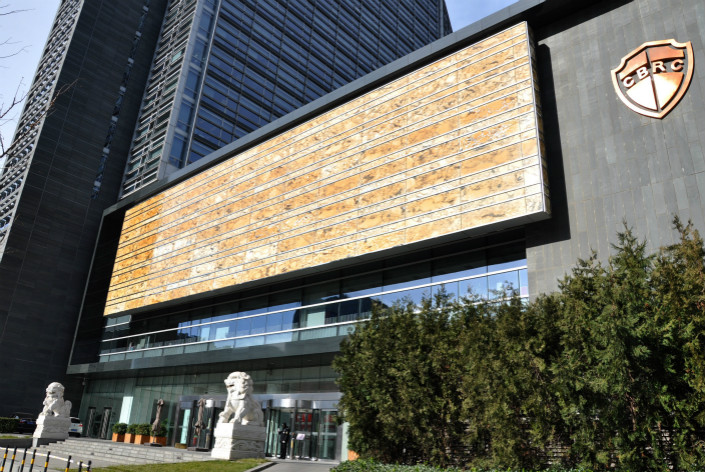 The headquarters of China Banking Regulatory Commission in Beijing. This is the second time in a month that the PSB has been named, shamed and fined by the regulator, which is intensifying a campaign to clean up an industry rife with fraud and irregular activities, especially in the murky shadow banking sector. Photo: IC

China’s state-owned Postal Savings Bank (PSB), one of the country’s biggest banks, has been caught up in yet another scandal, this time over a massive fraud involving the sale of 3 billion yuan ($474 million) of wealth management products by one of its sub-branches to raise money to repay forged discounted bills of exchange.

The banking regulator announced over the weekend that the Hong Kong-listed bank was fined 90.5 million yuan and 11 other lenders were hit with a combined penalty of almost 200 million yuan for their involvement in the scam which originated at the Wenchang Street sub-branch of the PSB in Wuwei city in the northwestern province of Gansu in 2016.

The head of the sub-branch has been banned from working in the banking sector for life and has been transferred to the “judicial authorities,” the China Banking Regulatory Commission (CBRC) said in a statement Saturday. Four other PSB officials were barred from taking senior management jobs for two to five years, it said.

This is the second time in a month that the PSB has been named, shamed and fined by the regulator, which is intensifying a campaign to clean up an industry rife with fraud and irregular activities, especially in the murky shadow banking sector. On Dec. 29, the CBRC announced it had fined the lender 520 million yuan for its part in a scandal that centered around fraud at China Guangfa Bank.

“This is a major case that saw bank employees collude with external operators to forge official seals, fabricate licenses and contracts, and illegally conduct interbank wealth management and discounted bills business to raise and misappropriate funds,” the CBRC said in its statement detailing the latest fraud at PSB.

“It involved many institutions, the circumstances surrounding it were serious, and the dealings severely disrupted market order,” it said.

The scandal underscores the dangers that have built up in the financial system over the last few years due to lax regulatory oversight, banks’ innovative methods of skirting rules and weak internal risk controls. Under orders from President Xi Jinping to rein in financial risks, the People’s Bank of China and the banking, insurance and securities watchdogs have over the last 18 months stepped up supervision of the industry to root out fraud and wrongdoing.

The Postal Savings Bank, which raised $7.4 billion through an initial public offering in Hong Kong in September 2016, is one of the country’s top 10 banks in terms of assets and has some 500 million customers. It primarily serves individuals and small businesses in rural and suburban China, and with around 40,000 outlets has the biggest network of any bank on the mainland.

The scandal in Gansu was uncovered in late December 2016 during an inspection of the Wuwei branch by officials from the PSB’s regional head office, the regulator said in its statement.

The Wenchang Street sub-branch was found to have forged 147 discounted bills of exchange, with a combined nominal value of 7.9 billion yuan and then sold them to 10 banks at a price the CBRC did not disclose in its statement. A bill of exchange is a binding promise by one party to pay a certain sum to another party at a fixed date for the sale of goods and services. Companies often sell these to banks at a discount to get the money straight away and banks can then sell them on, usually to other financial institutions.

Although the sub-branch had no right to issue wealth management products, it fraudulently sold 3 billion yuan of products under the name of the Wuwei branch to raise money to buy the bills back. The CBRC statement did not disclose what the funds raised from the sale of the bills were used for.

The CBRC said it fined Jilin Jiaohe Rural Commercial Bank, a small bank in the northeastern province of Jilin, 77.44 million yuan for illegally buying the wealth management products from the sub-branch and slapped a combined penalty of 127.5 million yuan on the 10 lenders who bought the discounted bills of exchange. Warnings and other administrative penalties were also meted out to dozens of managers at the banks.

Guo Shuqing, the head of the banking regulator, has repeatedly warned lenders they are living on borrowed time and vowed to root out fraud and other malpractice. In a statement two weeks ago, the watchdog vowed to intensify its crackdown on lender misconduct in 2018, with a focus on interbank deals and shadow banking, warning that the country still faces “complicated and grave” potential financial risks.

Part of the strategy appears to be stepping up the public shaming of banks caught up in wrongdoing.

In November, the regulator said it had fined the Beijing regional headquarters of the Agricultural Bank of China 19.5 million yuan after four of its former employees embezzled 3.9 billion yuan worth of bills of exchange more than two years ago.

In December, the CBRC announced it had handed out its biggest fines ever for a scandal at China Guangfa Bank. The lender was ordered to pay a penalty of 722 million yuan for fabricating guarantee documents on 1 billion yuan worth of bonds that went into default, for hiding bad assets and operating with lax internal controls that enabled wrongdoing. Another 13 banks including PSB were fined a combined 1.3 billion yuan for helping China Guangfa Bank to conceal bad assets.

Earlier in January, the regulator reported that the Chengdu branch of Shanghai Pudong Development Bank was handed a 462 million yuan penalty for falsifying loan deals and hiding non-performing assets. The branch worked with seven property and mining companies to set up about 1,493 shell companies to transfer risky debts to help the bank cover bad loans. It issued 77.5 billion yuan worth of credit lines to the shell companies by falsifying business and employing other irregular methods.