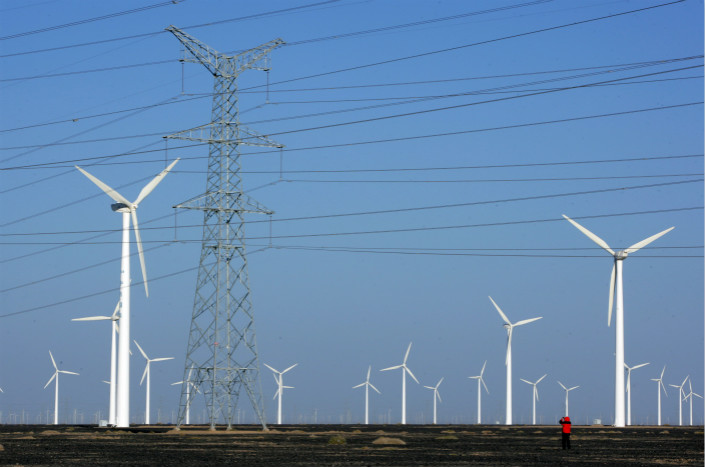 A court is set to hear a closely watched case in which a prominent environmental group is suing a power-grid company for refusing to purchase electricity generated at wind and solar farms and thereby violating a clean energy law.

The court in Ningxia, in China’s northwest, summoned attorneys for Friends of Nature, a Beijing-based nongovernmental organization (NGO), and the regional subsidiary of the State Grid Corp. for talks on Tuesday.

Such a three-way meeting, which is common in the Chinese justice system, helps trial judges become familiar with the case and also indicates that a court hearing is imminent, according to Liu Xiang, a lawyer who represents the NGO.

Friends of Nature filed the lawsuit at the Yinchuan Intermediate People’s Court on Jan. 11, demanding 310 million yuan ($49 million) from the local unit of the State Grid Corp. for compensation for refusing to transmit wind and solar power. The money would be used to address pollution that had been produced from the use of coal and hydropower, the group said.

The amount was calculated by a panel of academics commissioned by Friends of Nature, Liu said.

The case is one of several high-profile pollution-related lawsuits the NGO has filed against subsidiaries of the government-run State Grid Corp. since 2016, and comes as China seeks to cut consumption of coal to reduce smog, which disproportionately affects northern China, particularly in winter.

Under China’s Renewable Energy Law enacted in 2006, power-grid operators must purchase electricity generated by wind and solar farms in their areas in accordance with agreed-upon contracts and prices.

But state-owned grid companies often flout such requirements and use fossil fuels or hydropower facilities instead, leaving power generated at wind and solar farms unused, according to Liu.

That has forced wind and solar companies to cut back operations, as they are unable to sell electricity to the grid companies, Liu said.

Liu said that his client did not file the lawsuit on behalf of any specific wind or solar farm in the region, but rather to address harms the country as a whole had suffered.

More than 12% of the 348 billion kilowatt-hours of wind power generated last year was wasted because grid companies refused to purchase it, China’s National Energy Administration (NEA) said in February.

Citing numbers from the NEA, Friends of Nature said that 3.36 billion kilowatt-hours of solar power, or the equivalent of 1.1 million metric tons (1.21 tons) of standard coal, were wasted in Ningxia during an 18-month period leading up to July 2016.

A lawyer for the State Grid Corp. subsidiary, Zhang Yiping, said that most of the wind and solar farms are located in remote areas, which are hard to link up to the power grids operated by his client.

Use of wind and solar power is also affected by seasonal fluctuations in supply, while his client can rely on more stable hydropower facilities and coal-burning power stations, Zhang said.