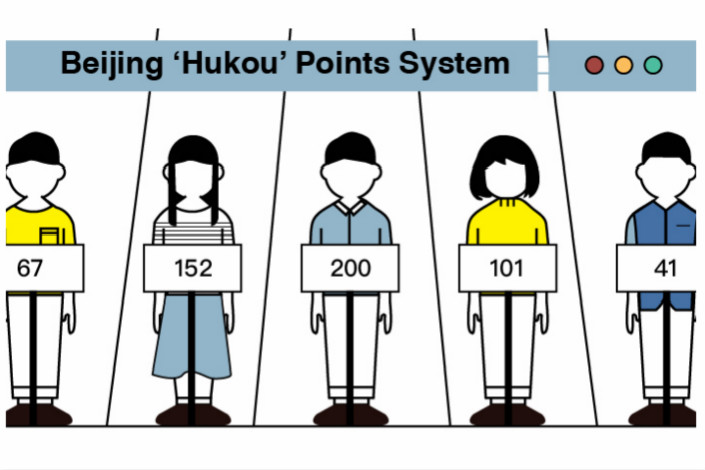 The government of China’s capital has unveiled long-awaited guidelines to allow out-of-towners to apply for a document that would grant them full access to Beijing’s public services.

However, members of the public have been left guessing whether they would actually score well enough in the points-based system — reminiscent of that used to evaluate immigrants in some developed countries — as the unannounced cutoff point will be “tied to the government’s population control goal.”

The household registration — or “hukou” — system, in place since the late 1950s, was designed to restrict the flow of people from rural to urban areas and from small to large cities, as residency was tied closely to access to many benefits, such as monthly rations, under the planned economy.

After the process of economic reform started in the late ’70s, the system could no longer prevent people from moving around the country, but it still limits nonlocals’ access to services such as public schools.

Beijing’s government said late in 2015 that it plans to widen access to local hukou to professionals who have resided and worked in the city for years, following in the footsteps of Shanghai and the southern metropolis of Shenzhen.

The city has grappled with problems linked to its huge population in recent years such as traffic congestion, pollution and pressure on resources such as water.

Beijing announced in September that it would cap its population at 23 million by 2020 after being told by the central government to transfer some of its “non-capital” functions to outlying areas or outside the city altogether.

The Chinese capital’s official population was down 0.1% last year to 21.7 million at the end of 2017, but the slight drop resulted from a decrease in the number of people who already have a Beijing hukou, according to the Beijing Municipal Bureau of Statistics.

Policymakers have to balance using the hukou system to attract the professionals and entrepreneurs who bring in the most tax revenue with pressure to limit population growth, according to the Beijing Municipal Human Resources and Social Security Bureau, which drafted the new guidelines.

Under the new hukou rules, workers from outside of the capital must first meet four basic requirements regarding their age, criminal record and contribution to the local social security fund.

For instance, they must be under China’s legal retirement age, set at 50 for most female workers and 60 for the majority of men.

A person is required to have made contributions to the government-run social security fund for at least seven years in a row to be eligible.

Those who have met the basic requirements can then add up their score across nine criteria, including their age, education level and home-ownership status to see if they meet the as-yet-unannounced minimum points threshold, according to city government.

Those who are 45 years old or younger will be awarded 20 points. Applicants with a Ph.D. will receive 37 points, while applicants with a postgraduate degree will get 26 and bachelor-degree-holders will score 15 points.

One standout criteria is that applicants can get up to six extra points for living outside the six downtown districts of Beijing and can earn a maximum of 12 points in extra if they both work and live in the suburbs.

Applications will be open as of Monday, and the government will announce the minimum-points threshold at the end of each year, according to the city social security bureau.

The cutoff score will be subjected to an annual review and determined in accordance with the city’s need to control its population and its overall capacity, the bureau said.