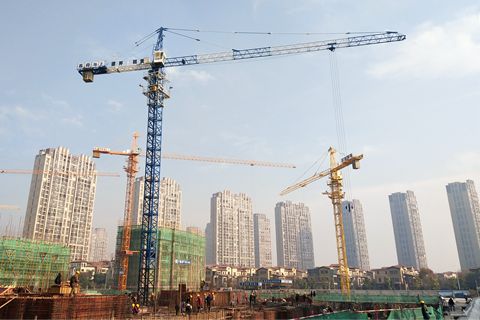 China’s REIT market could potentially be worth more than 12 trillion yuan, surpassing the U.S, if legal and tax barriers were removed, a report says. Photo: VCG

China’s new central bank governor said the delay in the development of China’s real estate investment trust (REIT) market results from the underlying assets not actually being sold in the market.

When asked about the timetable to launch publicly traded real estate investment trust products in China, People's Bank of China Governor Yi Gang said Thursday at the Boao Forum for Asia Annual Conference that the regulators are mulling policies to effectively develop the country’s REIT market.

REITs are a collective investment program selling shares in a company that owns, operates or finances income-producing properties. Like mutual funds, REITs are popular with investors in developed markets like in the U.S. However, legal, regulatory and tax issues have prevented a real REIT product in China, despite it being a country with a booming real estate industry.

The central bank governor said that China hasn’t developed a REIT market for years largely because the underlying assets in China are very different from those in developed markets.

“Underlying assets of securitized REIT products (in developed markets) are really sold in the market so the debt level could come down (for the developers),” Yi said, “But in China, companies are not willing to sell the underlying assets of REITs sometimes because these assets are just too good.”

REIT products were first introduced in the U.S. in the 1960s and achieved explosive growth in the 1980s. The U.S. REIT market exceeded $1 trillion in 2016. More than 40 countries and regions have issued REIT products.

Citic’s REIT is more similar to asset-backed securities (ABS) than a real REIT because the product is traded privately and it’s not taxed like a REIT.

Fitch Ratings said in a report that Citic's REIT also differs from traditional REITs in that it offers a predetermined yield and a finite time horizon limited to five years.

Since 2014, Chinese companies have sold many such “quasi-REITs," which are open only to qualified institutional investors. Currently nearly 50 billion yuan of such quasi-REITs are all actually ABSs, a REIT investor told Caixin.

In 2015, China Vanke Co., one of the country's biggest property developer, teamed up with Penghua Fund Management to launch the country’s most REIT-like investment product for public investors.

But three years since then, Vanke’s REIT is still the only publicly listed REIT in China.

China’s REIT market could potentially be worth more than 12 trillion yuan, surpassing the U.S, if legal and tax barriers were removed, according to a report released in January by Peking University’s Guanghua School of Management.

“The high taxes for launching a REIT product discourage firms from taking part. The subsequent tax burden for operating REITs also lowers their rate of return, making them less attractive for investors,” said Liu Qiao, finance professor and dean of the Guanghua School of Management.

According to a calculation included in the report, the comprehensive tax rate levied on the issuers of REIT products could be as high as 21%, which means launching a REIT backed by a property valued at 10 billion yuan could carry a tax cost of 2.1 billion yuan.