Q&A: How Five Men Were Wrongly Convicted of Murder 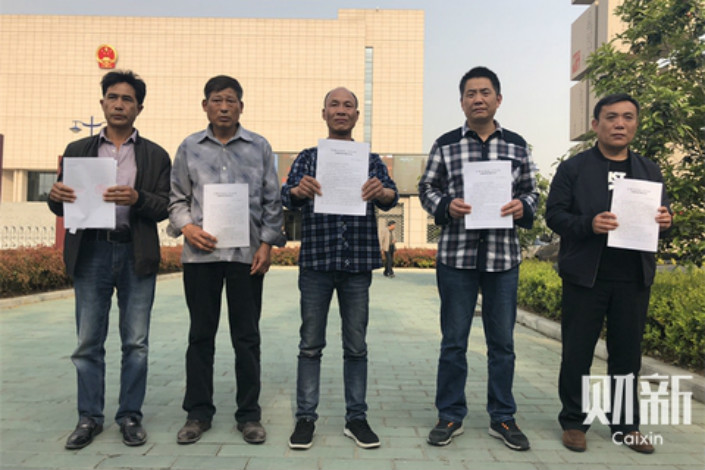 The "five Zhous" show reporters outside the Anhui High People's Court on April 11 the court documents declaring them not guilty of homicide. Photo: Xiao Hui/Caixin

On Wednesday, a court in China dramatically overturned the 20-year-old murder convictions of five men. The accused — all surnamed Zhou, but not related to each other — have long maintained they were tortured into confessing.

Now the head judge of the original trial takes Caixin inside what happened, how the legal system failed, and how the “five Zhous,” as the public came to call them, were unjustly charged with the 1996 attack on a rural family in Anhui province.

Wu Jicheng told Caixin that neither the case’s panel of judges at the Fuyang City Intermediate Court nor its adjudication committee — a group of court administrators who are not necessarily judges tasked with discussing the case — believed the five men should have been pronounced guilty. However, Wu said, pressure from superiors and interests external to the case resulted in the eventual guilty verdicts.

Wu began his legal career in 1982 after a stint in the military, and served as the presiding judge in the initial trial of the five Zhous, as well as on a similar case around the same period involving five Fuyang youths who were later deemed falsely convicted in 2015. In 2004, Wu was convicted of bribery and rape, and sentenced to eight years’ imprisonment. But he has maintained that he was framed, forced to confess, and is not guilty of rape, a charge that years later, he is still appealing.

The following excerpts from Caixin’s interview with Wu have been translated from Chinese and edited for length.

Caixin: How do you feel about the exoneration of the five Zhous, given that you were the presiding judge during their first trial?

Wu: Rehabilitation was the reasonable thing to do, but justice has come too late. During the debates among the panel of judges and the first adjudication committee in 1998, my attitude was very clear: The evidence in this case was obviously insufficient. With the existing evidence, there was no way to prove that Zhou Jikun and the other four defendants had committed homicide. A guilty charge could not be established, and by law they should have declared the five defendants not guilty. This opinion was unanimously adopted by the judges on the panel and the members of the first adjudication committee.

What caused the court to eventually sentence Zhou Jikun and Zhou Jiahua to death as the main perpetrators in this case?

The breaking point came when the murder victim’s father, Zhou Jiding (who himself had survived the attack on the family), came to my office and drank pesticide, eventually dying despite attempts to save him. After he died, the situation changed dramatically.

Do you still remember that encounter with Zhou Jiding?

It must have been after the second day after the adjudication committee members began their meeting. The first day’s debate was very intense, and went on until after 6 in the evening, and the sun was already setting.

Early the next morning, Zhou Jiding came to my office and asked me if we were going to declare the five defendants not guilty. I did not answer, but instead asked him how he knew. We had finished our discussion in the evening of the previous day. If Zhou Jiding already knew the next morning about the contents of the discussion, someone must have leaked the information. Then Zhou suddenly produced a container of pesticide from inside his bag.

Before I could react, he swallowed a mouthful of pesticide. I rushed forward and knocked the bottle out of his hand. I called 120 (the medical-emergency phone number). The ambulance did not arrive soon enough, so we took him to the hospital ourselves. But it was too late, and he died three days later.

Who attended the adjudication committee’s meeting?

The attendees included the regular members of the Fuyang Intermediate Court’s trial committee. Three public prosecutors from the Fuyang procuratorate, including the one assigned to the case, had been invited to attend as nonvoting members.

Usually, public prosecutors would not be invited to attend the trial committee’s meeting, but this case was special. The adjudication committee unanimously agreed that the five defendants should be declared not guilty. But the nonvoting public prosecutors believed that the facts were clear, the evidence was sufficient, and that the defendants should be convicted. We did not accept their opinion.

Later, I heard that it was someone within the procuratorate who had leaked the committee discussion results to the victim’s family. But at the time, we did not look into who exactly this person was.

What happened after the victim’s father drank pesticide?

After he committed suicide by drinking pesticide, we judges were no longer able to control the situation. As a major murder case, it was already a tense situation. Now that the victim’s family member had committed suicide, leaders at all levels, from the municipal committee to the provincial party committee, were paying close attention. The leaders also wrote us demanding clear blame and asking us to improve the quality of our case handling. The many layers of stress were very intense.

They say that at the time, the superiors were very dissatisfied with me, saying that I was not qualified for the position of presiding judge. They wanted me removed from the post.

During the first trial, who made the decision to sentence two of the defendants to death?

There were no more judges’ panel meetings after Zhou Jiding drank pesticide and died. Instead, the trial committee was called in to meet once more. Because of external interference, in the end the judgment was no longer within the control of the adjudication committee.

I felt very negative about the reopened adjudication committee meeting. I was disgusted by the outside interference. A judge’s job should be to make judgments based on the law and the evidence, to uphold justice.

The higher-ups’ instructions were sent down the line. I don’t know who exactly called the shots. I had reservations about this result.

Ultimately, this case had massive holes in the facts and the evidence. The defendants and their lawyers’ protests against the judgment were also particularly strong. Some believed that we should keep these people alive, and if it was a miscarriage of justice, they could be rehabilitated one day. So the two men’s death sentences were changed to commuted death sentences. This kept them alive, and left some leeway.

What is your view on this case’s many twists and turns?

From the death sentence to the commuted death sentence, it was reduced each time. But no one dared to declare the defendants not guilty. Everyone was scared to bear the responsibility. Someone had already drunk poison. What if something similar happened again?

Ultimately, at that time, we were under the rule of man, not the rule of law. But times are changing. In recent years, the central government has issued documents stipulating and requesting that leading cadres must not meddle with cases. Judicial corruption is being prevented systematically, ensuring fairness and justice.

Both miscarriages of justice happened in 1996. The investigating and prosecuting organ was, in both cases, the Fuyang city public security bureau. There are many other coincidences. For example, there were five defendants in both cases, the judges and the prosecutors in both cases were the same, and even the judges were from the same group of people. Both cases involved many different opinions, and the final conviction was reached after an intense struggle.

If you ask me, the originator of the injustice was the public security bureau. But is it possible for these unyielding people to admit a crime? In my 20-odd years as a judge, I abhorred the practices of torture and forced confessions. Even though the retrials of both cases did not determine that torture and forced confessions were used, the victims (the wrongly convicted defendants) really bear the scars.

When the court session for the case of the five Fuyang youths began, Zhang Yun (one of the defendants) pulled aside his clothes in court to show us his bruises. His bruises were clearly visible. Before he entered the detention center, he was uninjured, so why was he covered in wounds from head to toe after leaving it? Who exactly hit him? Why did the defendant make a confession of guilt at the police facility, only to retract it later in court? In the Guoyang county case (of the five Zhous), why did 18 witnesses all retract their statements in court?

One of the witnesses made a very strong impression on me — a very thin, elderly man. When he entered the courtroom he knelt down and said, while crying, “I too am a party member, and I have never been humiliated in this way.” This witness said he had been slapped on the face by the personnel handling the case and beaten until his mouth bled. When he spat the blood out into a spittoon, the case-handling personnel had said, “You think this is where you can spit? Lick that clean.”