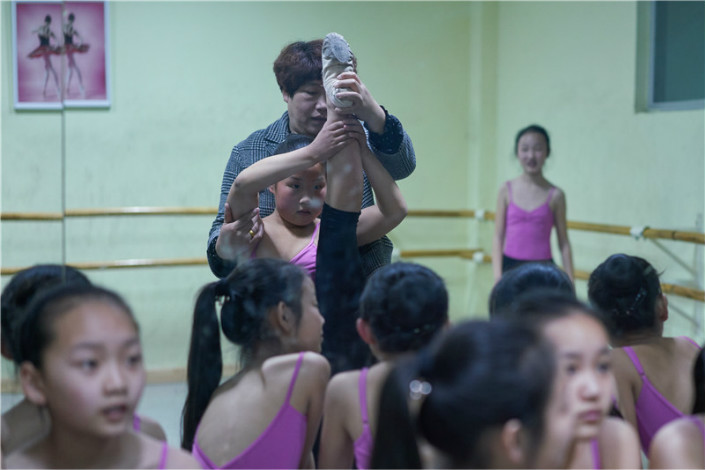 Liu Qiuju helps her daughter Jiaojiao during a ballet class. Many mothers in the township have now become experienced coaches for their daughters, despite never having trained in ballet.

One morning in late March, Jiaojiao, a fifth-grader in rural Hebei province, got up earlier than usual and rushed to pin her long hair into a tightly coiled bun at the top of her head.

Jiaojiao had been preparing for this morning for more than a year, jogging regularly in a special sauna suit her mother Liu Qiuju had bought, eating only fruit for dinner each day and practicing martial arts. Her dream was to lose enough weight to get into the province’s Hebei Vocational Art College as a dance major, and the college was holding a local entrance audition in just a few hours.

For Jiaojiao and other young ballet students in Duancun township, the province’s art college is an escape from rural life, and an alternative to the exam-driven route to success that was the only option for previous generations.

Zhuzhu’s sister used to be an enthusiastic dancer but gave up dancing a few years ago because of her heavy school workload and the poor training available at the time.

Duancun, near northern China’s Lake Baiyangdian and around 160 kilometers (99 miles) southwest of Beijing, is in an area best known for heavy industry and heavy pollution.

Yet, for three years in a row, the province-level school has sent scouts to the township to seek future ballet dancers.

This would have been unthinkable before the arrival in Duancun of Guan Yu, a deputy director at the renowned Beijing Dance Academy. Guan began teaching ballet in the township in 2012 at the invitation of the Hefeng Art Foundation, a Beijing-based private foundation focused on arts education for children in underdeveloped regions.

Guan had lived in a village as a child, but had forgotten what it was like, he told Caixin. The only impressions of rural life he had, before coming to Duancun, were romanticized visions of golden fields of wheat and the picturesque scenes he had encountered while traveling abroad.

The reality of the smoggy township, with its streets littered with household waste, was a shock to Guan. What distressed him even more was the cold welcome he initially received from local parents.

Guan thought that art should be a part of every child’s life, and that it would be a shame if people went their entire lives without having heard of Tchaikovsky. “Even if they become farmers or entrepreneurs in the future, when they sit in front of the TV to watch Swan Lake, they will be able to understand it.”

But local parents believed that passing school exams was the only way for their children to leave the township and improve their lives. They found it difficult to accept Guan’s idealism, and few parents signed their children up for his ballet classes, initially.

Then, in 2016, the acceptance letters from major regional dance institutions began arriving. That year two of his students, Liu Xietong and Zhu Bingrui, gained admission to the Hebei Vocational Art College, while their classmate Ma Yue was accepted by the Liaoning Ballet Ensemble. Seeing the tangible results of learning ballet spurred more parents to enroll their children in Guan’s classes.

On the day of this year’s audition, Jiaojiao and her mother arrived at the venue, Duancun School, half an hour early.

At the school, where Ma Yue’s dance costume is displayed proudly in a glass case, Jiaojiao warmed up while her mother helped tidy up the dance studio.

The audition began at 10 a.m. sharp, with proctors taking down candidates’ physical measurements. Despite Jiaojiao’s grueling year of dieting and exercise, she was told to “go lose some more weight.”

But the hardest test came in the last part of the audition, when the examiner suddenly announced that every candidate should sing a song. Most of the 11-year-olds in the studio obliged, and performed tunes they had learned at school. But when the examiner motioned for Jiaojiao to take her turn, the shy child was unable to produce a single note. The room was filled instead with awkward silence.

Out of the 13 students who auditioned that day, eight were eventually invited to continue the admission process. Jiaojiao found out that she had failed to make the cut, but waited until she was back in her room at home to cry.

By evening, Jiaojiao was feeling slightly better. She resolved to try again the next year. “If I really can’t pursue this path, I’ll switch to another one that I enjoy,” she said.