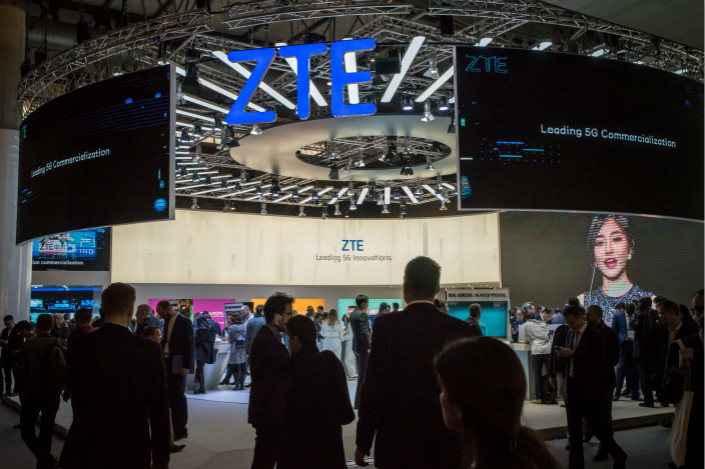 * The official Xinhua News Agency has accused the U.S. of opportunistically punishing ZTE during a period of heightened trade tensions

* Other Chinese media outlets said Washington is trying to hamper China's development, and that the country should aim to become more self-reliant

(Beijing) — Official media on Wednesday accused the U.S. of trying to stifle China’s high-tech development and politicizing competition, after Washington imposed punitive sanctions on ZTE Corp., one of the nation’s high-tech champions.

The Monday announcement by the U.S. Commerce Department marked the latest twist in a case that dates back to 2012, when Washington began probing ZTE over allegations that it sold networking equipment containing U.S.-made parts to Iran in violation of U.S. sanctions at that time.

ZTE later reached a settlement in the matter, allowing it to avoid a Washington order that would have barred it from buying U.S.-made components for seven years. But Washington later determined the company hadn’t fully complied with the settlement by failing to discipline certain employees, and reactivated the original ban earlier this week.

While not denying Washington’s grounds for the latest action, Chinese media accused the U.S. of opportunism for raising the matter as trade tensions grow between Washington and Beijing. Those tensions, stemming from U.S. President Donald Trump’s accusations of unfair trade practices, have prompted Washington to unveil punitive tariffs against Chinese exports, leading China to unveil its own retaliatory moves.

The action against ZTE in the midst of those tensions is part of Washington’s broader plan to impede China’s economic development, said the official Xinhua News Agency in an editorial titled “U.S. decision on ZTE stokes up trade tensions with China.” It noted that the U.S. often prohibits exports of its sensitive technology to China, while also complaining about its big trade deficit with the Asian country.

“It is unfair that on one hand the United States restricts the export of high-tech products to China, while on the other it doesn't want China to produce them by itself either,” the editorial said. “Analysts have said that the U.S. punitive measures taken recently against China are not about trade, but about the impediment of China’s development.”

The Global Times, affiliated with the official People’s Daily, said the action against ZTE should be a wake-up call for China to reduce its reliance on imported high-tech products, especially the semiconductor microchips that power everything from smartphone to microwave ovens. China imports $200 billion worth of such chips every year, and could instead spend that money to develop its own sector, the Global Times said.

“China has never questioned the reliability of U.S. suppliers in the past. But ZTE’s case suggests that U.S. supply is not reliable,” the newspaper said. “The global supply chain is fragile in the face of politics. Americans have started to reckon upon means to counter China’s rise and restraints on high-tech exports to China are their leverage. The U.S. may use this tool more widely in future.”

The official China Daily added that industry insiders believe the U.S. action was deliberately timed to give Washington extra leverage during its trade war with Beijing, and echoed the Global Times in calling on China to become more self-reliant in high-tech products.

“(T)here is also a consensus that Chinese companies need to develop their own core technologies rather than rely on U.S. suppliers,” China Daily said. “And there is an assumption that the decision is related to the rivalry between the two countries now that China is competing in the high-tech field rather than just low-end manufacturing.”