By Mo Yelin and Wang Qionghui 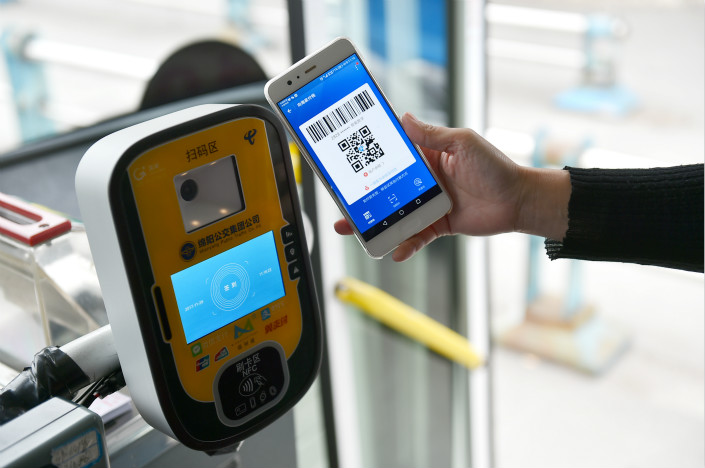 Bus passengers in Mianyang, Sichuan province, use Alipay to pay for their rides on Nov. 28. Photo: VCG

* Such payment services allows companies like Alipay to amass large amounts of passenger data, which can be used to generate revenue by targeting advertisers

(Beijing) — Leading electronic payments firm Alipay has embarked on an aggressive campaign to launch its service on buses, making public transportation the latest battleground in its battle for business with internet giant Tencent.

Passengers in at least 50 Chinese cities, from top-tier names like Guangzhou to smaller ones like Anyang in Central China’s Henan province, can now use their smartphone-based Alipay to pay fares on public buses, according to Alipay parent Ant Financial Services Group.

Ant Financial, an affiliate and former division of Alibaba Group Holding Ltd., said the service is set to expand to more than 100 cities next year. The service lets users call up a special QR code on their smartphones for individual cities, and the code can be passed over a scanner on buses to pay fares.

The move heats up the battle for public-transportation customers between Alibaba and Tencent Holdings Ltd., which has launched similar public-bus payment services in at least 55 Chinese cities.

Both companies have also competed for years in the private-car and bike-services sectors by backing different operators.

The rollout into public transportation has come relatively late due to the closed nature of such systems, which are usually custom-built by local state-owned operators that often have monopolies in individual cities.

Offering such payment services allows companies like Alipay to amass large amounts of passenger data, which can be used to generate revenue by targeting advertisers, according to Xiao Ying of Wuhan Public Transport Group Corp. Ltd.