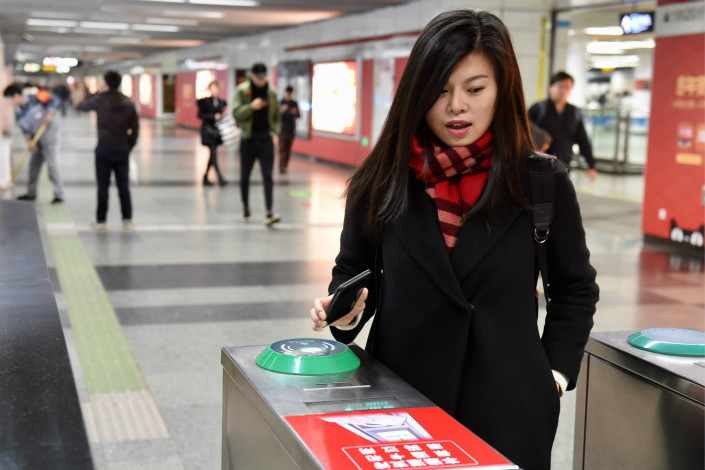 A Shanghai Metro customer uses a QR code to pay her fare at the Longyang Road Station on Tuesday. QR-code readers are being installed in all of Shanghai's 389 metro stations. Photo: IC

Beginning Saturday, Shanghai’s subway passengers will be able to use a mobile app to pay their fares.

QR code-readers are being installed in all 389 metro stations in the city, which will allow passengers to use an app developed by metro operator Shanghai Shentong Metro Group. The app – dubbed “Metro daduhui” – will connect to the payments systems of Alipay and China UnionPay, the operator said in a statement (link in Chinese).

Each station will have at least four turnstiles — two entering and two exiting — that support the new payment methods. All turnstiles on the city’s Line 17 and the east extension of Line 9 will support QR-code payments, according to the operator.

The Shanghai Metro will offer discounts to riders from Saturday through February to encourage passengers to try the new payment method.

The unveiling comes two months after Shanghai began testing the program on the city’s maglev line, and one month after the operator formed an alliance with Alipay, which is owned by Ant Financial Services Group, an affiliate of Alibaba Group Holding Ltd.

In November, Alipay rival WeChat, owned by Tencent Holdings Ltd., rolled out a similar payment option for the subway system in the southern city of Guangzhou, the capital of affluent Guangdong province.

China’s public transportation sector has become the latest battleground for the mobile-payment leaders, who are vying to make early entrances into new sectors.

Tencent has launched mobile-payments services on public buses in 11 Chinese cities — including Guangzhou, Qingdao and Hefei — while Alipay has launched similar services in as many as 18 cities, including smaller ones such as Jiaxing, in East China’s Zhejiang province.

Although Beijing has yet to accept QR-code payments, it launched a program last year to allow payment from smartphones equipped with near-field communication (NFC) technology. The Shanghai Metro has accepted payments via NFC since 2014, but not many riders use the function.