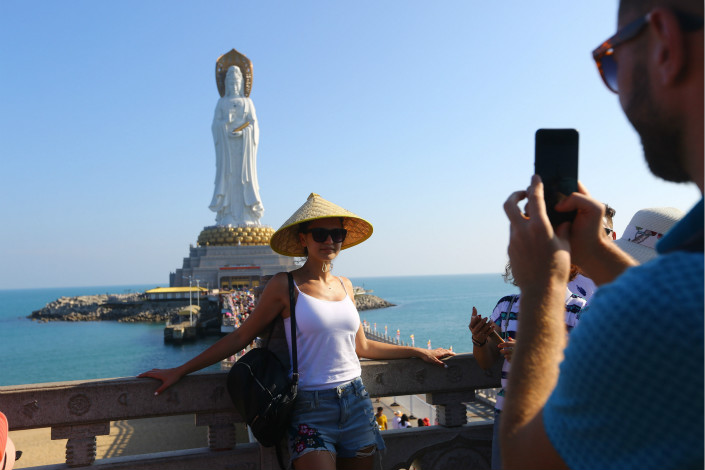 Foreign tourists take photos in front of the Guanyin of Nanshan, a 354-foot-tall statue of the bodhisattva Guanyin, in Sanya, Hainan province on Feb. 17. Photo: VCG

The island province of Hainan will fling its door wide to international tourists on May 1, when it begins granting visa-free stays to 59 nationalities amid a push to transform itself into “China’s Hawaii.”

The new program covers passport holders from countries in Europe and the Americas such as the U.S, Canada, Brazil, Britain, France and Norway, as well as some Asian countries, including South Korea, Japan, Singapore and Thailand, according to a statement issued by China’s State Immigration Administration on Wednesday (link in Chinese).

In 2000, Hainan started offering 15-day visa-free stays to tour groups from 21 countries. In 2010, it added five more nationalities to the policy.

The newly expanded list now includes more markets and applies to both tour groups and individual travelers by allowing them to stay up to 30 days in a single visit, the statement said, adding the effort is expected to draw in more international tourists to further underpin the province’s opening-up.

The news came on the heels of President Xi Jinping’s announcement last week that Hainan would become a free trade zone and free trade port “as a test ground for deeper reform and greater environmental conservation, as well as a center for international tourism.”

Betting on horse racing could be just around the corner in the island as well, as authorities later said they “encourage Hainan to nurture horse racing, as well as beach and water sports,” as part of a plan to turn the island into a hot spot for sports tourism.

The region can also explore lottery products linked to domestic and major international sports, they said.

Chinese authorities have been pushing to turn Hainan, previously regarded as a tropical backwater, into “China’s Hawaii.” The island has a population of 9.3 million and covers 34,000 square kilometers (13,100 square miles) in the northwest of the South China Sea.

The island welcomed more than 1.1 million overseas tourists in 2017, up nearly 50% from a year ago, according to the official Xinhua News Agency.

This staggering growth however still paled in comparison to neighboring island hot spots such as Indonesia’s Bali, which greeted more 5 million tourists from abroad last year.