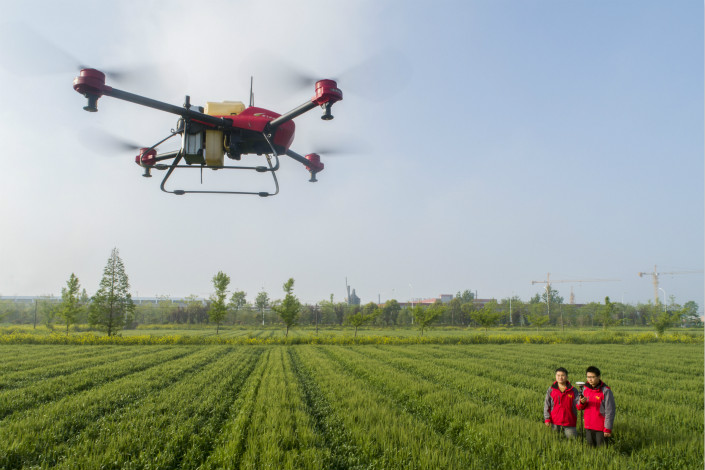 A drone sprays a wheat field with pesticide on Friday at an agricultural cooperative in eastern China’s Jiangsu province. Photo: VCG

The deal aims to improve the technology of DJI’s drones by taking advantage of Syngenta’s expertise in spraying pesticides on crops, the companies announced Wednesday.

A trial program will be rolled out in the northeastern province of Heilongjiang before expanding to other provinces like Zhejiang and Anhui, Caixin has learned.

Established in 2006, DJI has developed quickly with its consumer drones — mainly used for film shooting in the media and entertainment industries. But the company began flying its drones into the agricultural sector in 2015, tapping the growth potential of the market.

DJI said it has sold 7,500 drones for agricultural use in China, capturing a 70% share of the market.

The Shenzhen-based company is currently in talks with investors for a $1 billion funding round, which could eventually lead to an initial public offering, Caixin reported Wednesday.

The amount was initially reported to be $500 million, but was then raised to $1 billion amid investor enthusiasm. The new round of funding might increase the company’s valuation to $15 billion, according to The Information, a U.S. technology news portal.

Syngenta is the world’s largest crop chemical producer. It was formed in 2000 by the merger of Novartis Agribusiness and Zeneca Agrochemicals.

In January 2017, the state-owned China National Chemical Corp. announced that it had successfully completed a $49 billion takeover of Syngenta, after a long and bumpy ride to overcome regulatory hurdles and financing concerns.