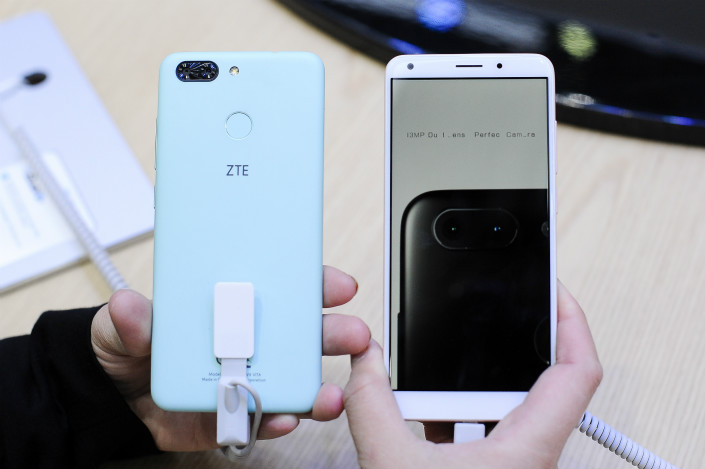 Telecom equipment-maker ZTE Corp. on Friday called U.S. sanctions against it “unacceptable” and a potential threat to tens of thousands of its employees’ livelihoods, but said it will still try to resolve the matter through talks with Washington.

In its first detailed response since Washington banned the company this week from buying U.S.-made components for seven years, ZTE said the move will “severely impact the survival and development of ZTE.” The case has drawn international attention because it comes as U.S. President Donald Trump spars with Beijing over accusations that China steals American intellectual property and that products like ZTE’s smartphones could pose a national security risk.

“In any case, ZTE will not give up its efforts to resolve the issue through communication, and we are also determined, if necessary, to take judicial measures to protect the legal rights and interests of our company, our employees and our shareholders, and to fulfill obligations and take responsibilities to our global customers, end-users, partners and suppliers,” ZTE said in its statement.

In an afternoon news conference, ZTE Chairman Yin Yimin said the sanctions will put the company into an immediate “coma” by risking the livelihoods of 80,000 employees. It will also jeopardize ZTE’s commitment to tens of thousands of global consumers who use its mobile devices, as well as thousands of partners including those from the U.S.

The case dates back for at least six years, when Washington began investigating ZTE for selling equipment containing U.S.-made parts to Iran in violation of U.S. sanctions at that time. Washington later found ZTE guilty of such sales, but the two sides reached an agreement last year that let the Chinese firm avoid a threatened seven-year ban on buying U.S. components.

Earlier this week, Washington announced that ZTE had failed to comply with some terms of that agreement, and that it would reimpose the seven-year ban on the company. Specifically, Washington said that ZTE had failed to reprimand certain employees as required by the earlier settlement. ZTE initially responded saying it was assessing the situation, and suspended trading of its Hong Kong- and Shenzhen-listed shares.

Its latest statement complained of unfair treatment, pointing out the company had been forthcoming about its past actions and had worked hard to comply with other elements of the settlement. It also noted the U.S. agency that conducted the investigation imposed the new ban “even before the completion of investigation of facts, ignoring the continuous diligent work of ZTE and the progress we have made on export compliance.” It pointed out that last year alone it spent more than $50 million on its export compliance program, and is planning to boost that level this year.

The case has drawn widespread attention in China due to ongoing trade friction with the U.S. Trump has recently vetoed several sales of U.S. high-tech firms to Chinese buyers. Washington has also pressured U.S. companies not to buy networking equipment and smartphones from ZTE and rival Huawei Technologies Co. Ltd. over concerns they could pose a national security risk due to potential for spying by Beijing.

Following announcement of the latest ZTE sanctions, official Chinese media have said the U.S. is trying to stifle China’s high-tech development, and called for the country to become more self-reliant in key areas like the manufacturing of cutting-edge microchips.