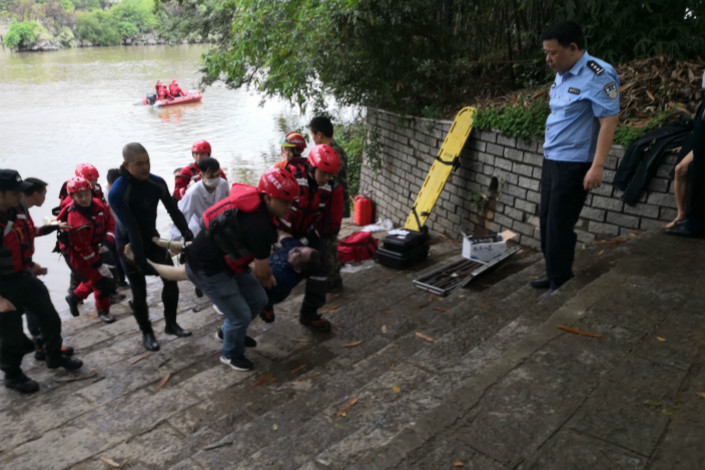 It is unclear how many rowers in total were on the two boats, but 57 fell into the water and 40 were rescued, with five now being treated at hospital, according to the official Xinhua News Agency. Photo: IC

The incident, in southern China’s Guangxi Zhuang autonomous region, occurred when the passengers were trying to surmount a dam made of rubble on the Taohua River. The vessel was caught in rough waters, and overturned around 2:40 p.m. on Saturday.

Another boat also capsized when it rushed to the site to help.

It is unclear how many rowers in total were on both vessels, but 57 fell into the water and 40 were rescued, with five now hospitalized, according to the official Xinhua News Agency.

The paddlers, most local villagers, were practicing for a once-in-a-decade special edition of the Dragon Boat Festival in the city of Guilin.

Dragon boat racing is a popular way to celebrate the festival for people in China and many other Asian countries.

About 600 officers were sent to the area to search for survivors over the weekend, according to a post on the Guilin police’s official Weibo social media account.

Two people who organized the drill were taken into police custody while investigators continue to look into the cause of the incident, Xinhua said.

The villagers did not have the required permission to practice in the water, police said.

Heavy rain over the past few days had raised water levels in the river, and contributed to the turbulent conditions, police said.

Video of the incident appeared to show that paddlers were not wearing life jackets when they capsized.