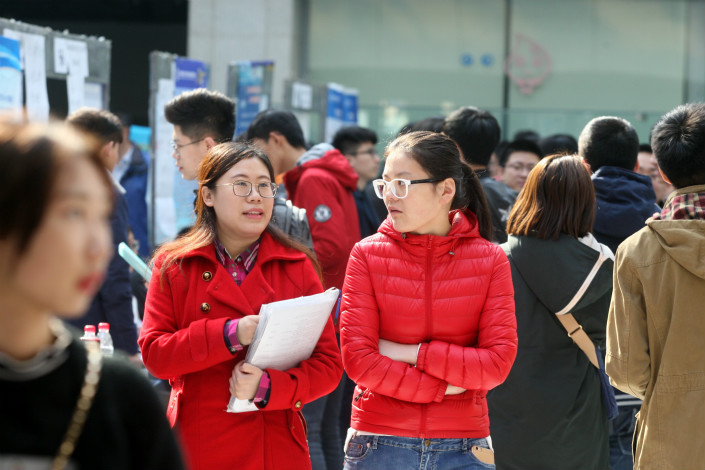 *Baidu, Alibaba point to large number of women in management as proof they aren’t sexist; Tencent says ads “clearly do not reflect our values”

(Beijing) — Tech giants Alibaba, Baidu and Tencent have responded to a report accusing them of sexism, admitting that mistakes have been made in job advertisements but maintaining that they do not discriminate against female employees.

Their remarks came after the New York-based Human Rights Watch on Monday issued a report on gender discrimination in hiring in China, singling out Alibaba Group Holdings Ltd., Tencent Holdings Ltd. and Baidu Inc. by saying they contribute to the “sexual objectification of women.”

The three companies “have repeatedly published” recruitment ads boasting they have “beautiful girls” working in the companies in an effort to attract male candidates, while some job postings use sexualized portrayals of women — often accompanied with photos of current employees — to attract male applicants, it said.

“These job postings — which were identified and removed prior to release of the Human Rights Watch Report — were isolated instances that in no way reflect our company’s dedication to workplace equality,” a Baidu spokesperson told Caixin.

About 45% of Baidu’s 40,000 employees are females, and this ratio is the same in the company’s midlevel and senior positions, the spokesperson said.

Alibaba also stressed that six of its 18 founders and 12 of its 36 current partners are women.

“Forty-seven percent of our employees are women, and women leaders account for one-third of our management positions. Our track record of not just hiring but promoting women in leadership positions speaks for itself,” the company said in a statement.

Tencent said it has investigated these incidents and is making immediate changes.

“We are sorry they occurred and we will take swift action to ensure they do not happen again,” the company said. “Tencent values diverse backgrounds and recruits staff based on talent and ability. These incidents clearly do not reflect our values.”

According to the report, a Weibo microblogging account used by Alibaba for recruitment posted a series of photos of several young female employees and described them as “late-night benefits.”

A recruitment video includes a Tencent male stating that “goddesses” are the primary reason he joined the social media giant, while a Baidu male employee said that having attractive co-workers is one reason why he is “so happy every day” at work, the report added. An Alibaba recruitment video has a female employee describing her ideal boyfriend while pole dancing.

Alibaba founder Jack Ma told a U.S. conference last year that women are the “secret sauce” of the company. He said companies should “hire as many women as possible.”

Jane Sun, CEO of China’s leading travel platform Ctrip.com International Ltd., said every company has the responsibility to instill a foundation of gender equality to create a fair environment for future generations.

However, she acknowledged that workplace gender equality still has a long way to go.

Sun said that only 10% of Fortune Global 500 Companies have female directors on their boards, and only 3% have female CEOs. Female representation at internet companies is even worse, and it is rare to see women in key management positions, she added.