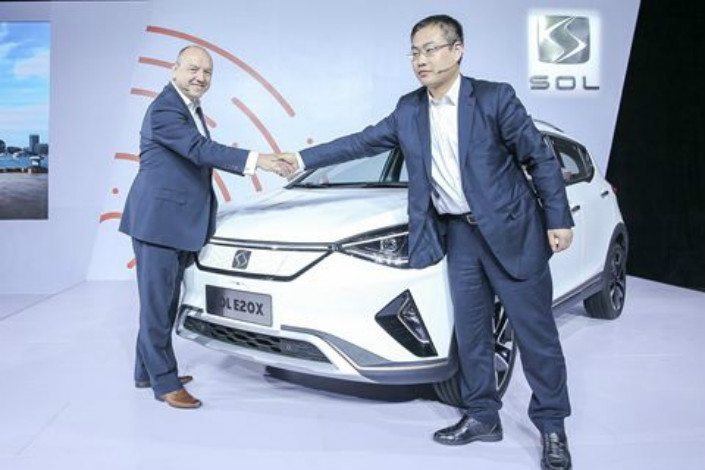 A Chinese joint venture of German automaker Volkswagen Group has unveiled its first electric-vehicle brand, in the run-up to meet Beijing’s new mandate that all automakers have to produce a certain number of new-energy vehicles from next year.

The rollout of the new brand, dubbed the SOL, was announced Tuesday by Jianghuai Volkswagen Automotive Co. Ltd, a venture between Volkswagen and its Chinese counterpart, Anhui Jianghuai Automobile Co. Ltd. (JAC).

The pair said their first model under the marque, the E20X, is slated to begin commercial production in the third quarter.

The Anhui province-based Jianghuai Volkswagen was set up in December, following a memorandum of understanding signed in September 2016. It is the first new-energy automaker jointly set up by a foreign manufacturer and a domestic partner.

Volkswagen’s third tie-up with JAC comes partly in response to a quota program rolled out in September that requires all carmakers in China to ensure that a certain proportion of their car sales come from low- and zero-emission vehicles beginning next year.

Under this cap-and-trade program policy, automakers must obtain a certain amount of credits in accordance to the various types of new-energy vehicles. This could amount to 4% to 5% of actual vehicle sales for most foreign automakers, according to some analysts.

China also announced earlier this month that the current 50% foreign ownership cap on electric vehicle-making ventures will be abolished by the end of this year.