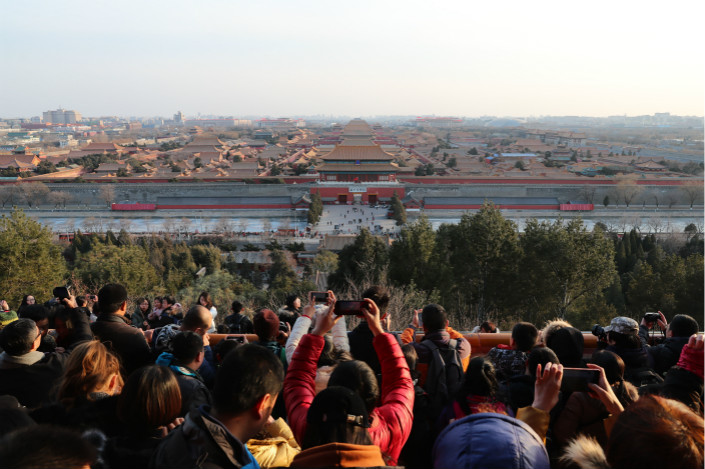 People use their smartphones to take pictures of Beijing's Palace Museum from the top of a hill in the capital's Jingshan Park on Feb. 20. Photo: VCG

China’s smartphone market performed worse than any other major global region in the first quarter of this year, with demand down by 6% as the market suffered from saturation, according to data-tracking firm Gfk.

The soft performance in China, the world’s largest smartphone market, compared with a 2% contraction for global smartphone sales, which totaled 347 million units during the three months through March, Gfk said in its quarterly report published on Wednesday. North America also saw a 5% drop in demand, while the figure was down by 2% in Western Europe.

“In contrast to previous years, Lunar New Year promotions failed to drive year-on-year smartphone demand growth in China,” Gfk said, adding China smartphone sales totaled 109.6 million units for the quarter, or about a third of the world’s total. “The online sales channel continued to experience strong smartphone demand growth, but this was more than offset by declines in the operator channel. GfK forecasts smartphone demand in China to decline by 4% in 2018 as the market becomes more saturated.”

China’s huge smartphone market has produced a bumper crop of manufacturers, and three of the world’s top five brands are now based in the country. But the explosion of local manufacturers, many making similar low-cost models, has led to intense competition and pushed many companies into the red. After several years of explosive growth, the China market posted its first annual contraction last year, with unit sales dropping 4.9%, including a 15.7% plunge in the fourth quarter, according to IDC.

Gfk had previously reported that fourth-quarter China smartphone sales fell 3%, meaning its own latest figures showed an acceleration of that trend.

Official government data painted an even grimmer picture. Data released earlier this month by the China Academy of Communications and Information Technology (CACIT), a research arm of the telecom regulator, showed that China’s smartphone sales plunged by 27% in the first quarter to 82 million units. Before that, CACIT data had shown a drop of 33% in December.