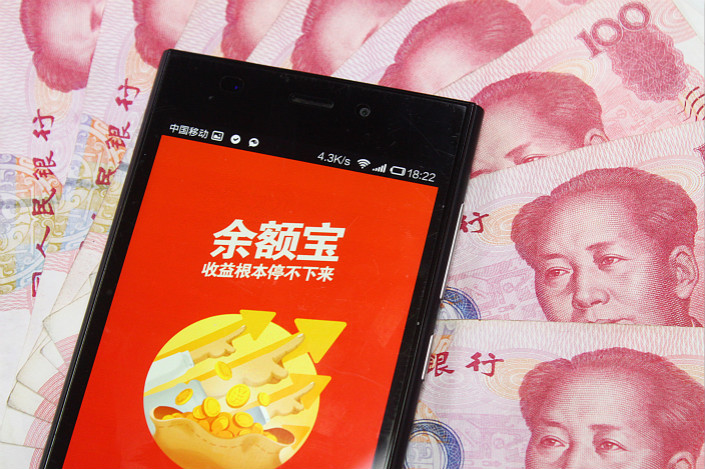 Founded in 2013, Yu’e Bao has ballooned in size as millions of users migrate to its affiliated online-payment application, Alipay. Photo: VCG

*The country’s money market funds as a whole grew by 23.69% and 6.79% in the third and fourth quarters of last year

Growth of the world’s largest money market fund picked up speed in the first quarter following a subpar expansion in the second half of 2017 amid regulatory pressure to cap investor contributions.

Yu’e Bao, controlled by Alibaba affiliate Ant Financial Services Group, increased its assets to 1.69 trillion yuan ($267.3 billion) at the end of the first quarter, up 6.92% from the end of last year, according to a quarterly report from fund manager Tianhong Asset Management Co. Ltd.

On average, China’s money market funds grew 23.69% and 6.79% quarter-on-quarter in the third and fourth quarters of 2017, according to data from the Asset Management Association of China (AMAC). In comparison, Yu’e Bao grew at 8.9% and 1.29% quarter-on-quarter during the same periods. AMAC has not released first quarter data, but estimates the money market fund industry grew by 15.89% during the first two months of this year.

The latest self-imposed curbs, introduced in February, include suspending automatic transfers from an Alipay account to Yu’e Bao, and capping the total daily contributions from all Yu’e Bao accounts, without revealing what the exact cap is.

But there is at least one loophole. Caixin found that redeeming money invested through Alipay into other funds can be automatically directed to Yu’e Bao. These funds are not subject to February's cap on daily contributions.

Founded in 2013, Yu’e Bao, which means “leftover treasure,” has ballooned in size as millions of users migrate to its affiliated online-payment application, Alipay. Most Alipay users transfer payments and refunds from online transactions into Yu’e Bao to earn returns that far exceed bank deposit rates.