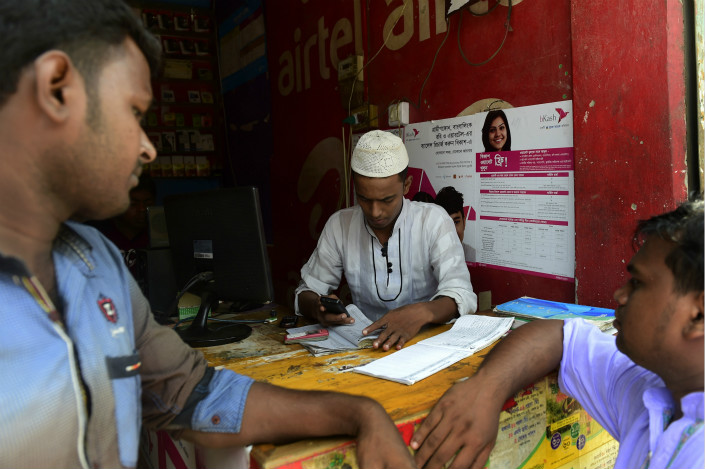 A bKash agent (center) makes a transfer via his mobile phone at his shop in Bangladeshi capital Dhaka on June 19, 2015. Photo: VCG

Ant Financial Services Group will acquire a minority stake in bKash, Bangladesh’s largest mobile fund-transfer provider, as the Chinese company continues to expand its global reach amid rumors of an imminent listing.

Ant Financial — the operator of Alipay, China’s largest third-party payment service — will obtain a 10% share in bKash through its investment with the option to subscribe to an additional 10%, according to local media reports citing disclosures from BRAC Bank Ltd., bKash’s parent company. The size of the investment was not revealed.

“Along with its investment, Alipay brings the best payment technologies built by thousands of engineers and the knowledge of applying those technologies to economies like China. ... Such (a) track record makes Ant Financial a fitting partner for bKash since Bangladesh too has a large population of 160 million and an economy that is advancing rapidly,” bKash CEO Kamal Quadir said in a news release.

Technologies and experience that Ant Financial can bring to bKash could assist the latter company with its development goals. “We plan to launch an app in the coming weeks that will allow payments through QR codes,” said Shamsuddin Haider Dalim, bKash’s head of corporate communications, without saying how exactly Ant Financial may play a role in developing the new service.

BRAC Bank currently holds a 51% share in bKash, as per Bangladeshi regulations that require mobile financial services companies to be subsidiaries of commercial banks. Before Ant Financial’s investment, Money in Motion LLC held a 36.5% stake in bKash, International Finance Corp. held 12.5%, while the Bill & Melinda Gates Foundation held preferential shares in the company.

Last year, Ant invested $200 million in South Korea’s Kakao Pay and an undisclosed amount in Mynt, a digital wallet operator in the Philippines. Ant Financial also entered into a joint venture with Indonesia’s Emtek to launch a new mobile platform for payment and other financial services.

The company, however, has also seen at least one high-profile investment fall through. Ant Financial announced in January it had terminated its bid to acquire U.S. money transfer company MoneyGram after failing to gain approval from the Committee on Foreign Investment in the United States, a government board that reviews the national security implications of foreign investments in the U.S.