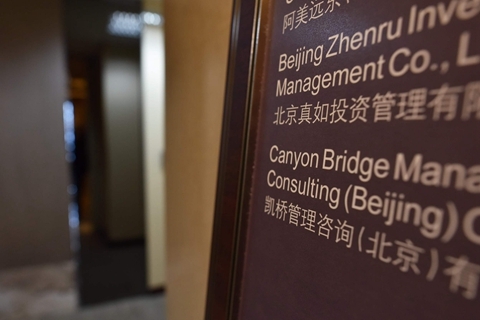 Benjamin Chow is a co-founder and partner of Canyon Bridge Capital Partners. Above: Canyon Bridge’s office in Beijing. Photo: VCG

An executive of a China-backed private equity fund is facing jail and fines for insider trading related to a proposed 2016 takeover in the U.S. semiconductor industry. President Donald Trump blocked the deal on national security grounds.

Benjamin Chow, co-founder and partner of Canyon Bridge Capital Partners, was convicted of securities fraud and conspiracy Tuesday in federal court in Manhattan, the U.S. Attorney’s office in New York said in a statement.

Chow, 45, is scheduled for sentencing Aug. 20. He may face as much as 25 years in prison for securities fraud and as much as five years for conspiracy, plus as much as $5 million in fines under U.S. law.

U.S. prosecutors accused Chow of tipping off a former colleague, Michael Yin, about Canyon Bridge’s planned acquisition of Lattice between March and November 2016. The information allowed Yin to profit by about $5 million from trading in Lattice’s shares, according to a court document.

U.S. investigators targeted Chow during a probe of Yin in another alleged insider trading case. Yin is a former partner of the Hong Kong-based private equity fund Summitview Capital. According to Bloomberg, Yin was sued last year by the U.S. Securities and Exchange Commission but wasn’t charged criminally. His brokerage accounts holding more than $29 million were frozen for allegedly making illegal profits from insider trading ahead of Comcast Corp.’s planned takeover of DreamWorks Animation LLC in 2016.

Investigators found records of conversations related to the deal between Chow and Yin on a mobile phone confiscated from Yin.

The records indicated that Yin suggested a lawyer to Chow for a review of the deal by the Committee on Foreign Investment in the U.S. (CFIUS), an interagency committee authorized to review certain merger and acquisition transactions in the U.S.

“I heard from a banker that the company (Lattice) is still concerned about the CFIUS review.… They may not consider a Chinese buyer if they have other options. You should be prepared for it,” Yin said in one message to Chow, according to the court document.

“We are at the company now, and we should be close to signing the contract,” Chow responded.

“This illegal tipping erodes public confidence in our markets as well as being unlawful,” said U.S. Attorney Geoffrey Berman in the statement.

Bloomberg cited Katherine Goldstein, Chow’s lawyer, as saying that Chow didn’t benefit from providing tips to Yin. “Michael Yin made a well-timed bet on Lattice, and he made millions of dollars, but Benjamin Chow didn’t make a dime,” Goldstein said.

Caixin was unable to reach Canyon Bridge and Chow’s lawyer for comment.