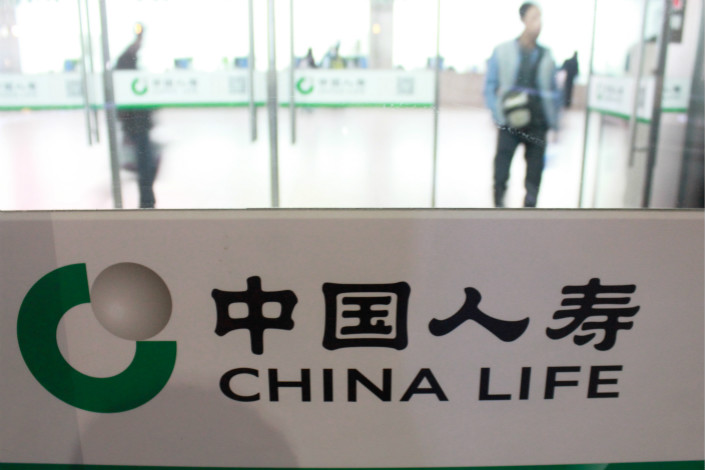 China Life Insurance Co., the biggest insurer, saw a 1.1% year-on-year drop in premium income to 243.4 billion yuan ($38.4 billion) in the first quarter in the face of a “complicated and severe external environment,” the company said in its earnings report on Thursday, without elaborating. Income from single premiums fell by 84.6% year-on-year to 9.36 billion yuan while first-year premium income — payments made in the first year of an insurance policy — on longer-term policies rose by just 1.5% to 61.2 billion yuan.

The volatility in domestic and overseas stock markets also hit returns on China's Life's investments. The company said its equity investment income “declined significantly” and its gross investment yield fell to 3.94% from 4.59% in the same period a year earlier. However, the group's net profit jumped 120% year-on-year to 13.5 billion yuan boosted by a change in the discount rate it used to set aside reserves on its insurance policies.

Ping An Insurance, the country's second-largest insurer, reported a 16.6% year-on-year fall in first-year premium income to 65.9 billion yuan, a slump analysts at Guotai Junan Securities Co. said was due to higher interest rates and the declining attractiveness of savings products. New business value, which measures the present value to shareholders of new business, declined by 7.5% year-on-year to 19.9 billion yuan in the first quarter, it said.

Overall, Ping An's total life and health insurance premium income rose by 24.9% year-on-year to 230.59 billion yuan, according to its quarterly report. But its net profit from its life insurance business rose just 1.9% year-on-year in the first quarter because the company changed the way it accounts for financial instruments under the new international accounting standard IFRS9. The company's overall net profit rose 11.5% to 25.7 billion yuan in the first quarter, driven by a 25.8% jump in earnings from its asset management business, which includes subsidiaries involved in banking, trusts and securities.

Premium income growth at Chinese insurance companies is slowing as the market matures and the insurance regulator continues its campaign to rein in financial risks. In particular, the authorities have clamped down on the sale of high-yielding short-term insurance products such as universal life insurance out of concern that such short-term products allow small insurers to raise huge amounts of cash quickly to fund investments in securities and the illiquid real estate market, which had the potential to create severe problems insurers’ cash flow and liquidity management.

The total premium income earned from life insurance policies in 2017 rose 20% to 2.66 trillion yuan, down from an increase of 36.8% in 2016, the insurance watchdog said in a statement on March 6.

The campaign triggered the fall of Xiang Junbo, the head of the insurance regulator, and a government takeover of Anbang Insurance Group, which specialized in selling universal life insurance.

Analysts at Nomura Holdings Inc. said in an April 20 report that the first quarter of 2018 was the worst quarter for the life insurance industry in the last four years in terms of premium growth, due to a combination of reasons including tighter regulations of products and capital requirements, competition from other financial products offering better returns, and a high base effect. But they expect growth in new business to recover in the second quarter partly as companies adjust and improve their business structure and increase the number of agents selling policies.