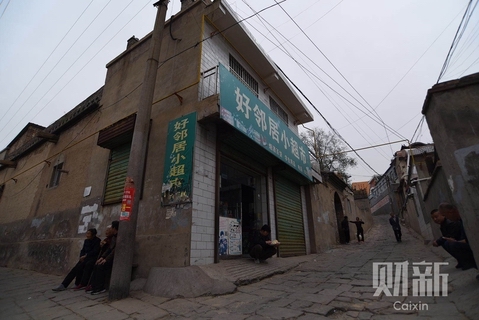 A small shop run by Wang Cailin became a shelter for more than a dozen students as the attack occurred. Photo: Ding Gang/Caixin

Four days after a deadly knife attack left nine teenagers dead outside a school in Mizhi, in northwest China’s Shaanxi Province, villagers have washed away all traces of their children’s blood from the street. But why the bloodshed took place remains shrouded in mist.

The attack — one of the deadliest rampages in recent years in China — took place around 6:10 p.m. on April 27 near the No. 3 Middle School in Mizhi County. As hundreds of homeward-bound students passed through a narrow ally to leave the school, a man armed with a knife stabbed 19 of them, killing nine, according to an official statement.

The suspect, a 28-year-old man named Zhao Zewei, was arrested at the scene.

Zhao had been a student at the school 10 years ago and had been bullied, according to local government officials and relatives. Zhao told police he attacked the students seeking revenge, police said. But that left confusion as to why Zhao attacked now, so many years after leaving the school.

Fellow villagers described Zhao as a frail, taciturn young man with few friends. He has spent most of his time at home playing computer games, they said. Zhao’s parents told police that their son has suffered mental illness. In a search of Zhao’s home, police uncovered five hidden knives, Caixin has learned.

Police are still investigating the attack. No further detail has been released.

The assault left people stunned. It seemed to be another in a series of puzzling attacks by people holding grievances against society or with mental health issues. In February, a knife attack at a downtown mall in Beijing killed one person and wounded 12 others. The 35-year-old assailant reportedly told police that he launched the attack to “vent his discontent.”

And in June last year, a 22-year old man who dropped out of school because of mental issues detonated a bomb outside a kindergarten in the city of Xuzhou, in the eastern province of Jiangsu, killing eight people including himself.

The No. 3 Middle School is one of the most prestigious in Mizhi with around 2,000 students and 100 teachers. The school, built on a hillside, connects with the outside through a narrow, 150-meter ally, the only passage for most students to leave the school.

On the afternoon of the attack, April 27, students were especially excited when the school bell rang as it marked the beginning of a three-day public holiday.

Liu Lichun, 66, was chatting with friends near the end of the ally when students started leaving school. He soon heard someone shouting that children had been struck by cars, Liu told Caixin.

But as Liu reached the scene, he found a young girl lying on the ground covered in blood. A driver in a nearby car said the girl had been stabbed. Then, Liu said, he saw Zhao from behind.

“I couldn’t see what was in his hand, but he was running and stabbing people randomly,” Liu told Caixin.

Wang Cailin runs a little shop at the end of the ally selling snacks to students. She said more than a dozen horrified students rushed into her store that afternoon. She locked the door and found one schoolgirl with a knife wound in her belly.

The narrow space in the ally made it difficult for students to flee, local residents said.

Li Chun, a student of the No. 3 Middle School, told Caixin she saw the suspect grab two students in front of her and stab them. She ran when the attacker came after her.

Witnesses told Caixin that some schoolboys threw stones at the assailant. As the attacker tried to flee, several teachers and security guards captured him. The police soon arrived and put the suspect into custody.

According to police, the suspect Zhao lives in a nearby village called Zhaojiashan. He was born into an ordinary rural family. His father is a carpenter. With two older sisters, Zhao is a beloved child of the family, villagers said. He graduated from the No. 3 Middle School in 2007 but left little impression on teachers and classmates.

Since then, Zhao has remained out of the sight of most of his neighbors. Some said he studied further at another school, then worked in a hotel for a while. But over the past two years, he has mainly stayed home playing computer games, villagers said.

“It is unimaginable,” one of Zhao’s fellow villagers said. He seemed to be a quiet and isolated young man, said the villager.

Zhao was last seen by villagers April 25, when people gathered to watch a local opera performance in the village.

Li Zhisheng, Zhao’s uncle, told Caixin that Zhao was small and frail as a student in the No. 3 Middle School. He was often bullied by classmates and got no help from teachers. “He was angry inside,” Li said.

Zhao asked to quit school while at the No. 3 Middle School, but his parents refused, Li said. As Zhao grew up, family members noticed his isolation and suspected that he had some mental illness, Li said.

Zhao’s parents worried that he suffered from depression and took him to hospitals for treatment, Li said. He said he believes his nephew had trouble communicating with others about his internal struggles.

“We also want to know why he did this,” Li said.