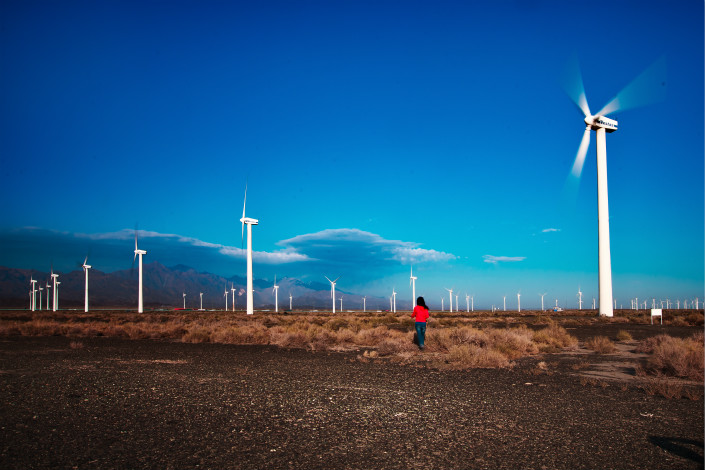 A wind-power generator is seen in the Dabancheng district of Urumqi, the Xinjiang Uygur autonomous region, on Sept. 15. Photo: VCG

China’s wind power generation inflated by nearly 40% in the first quarter of the year as Beijing continued to strongly promote clean-energy sources in its drive to clean up the country’s air.

At the same time, the amount of unusable wind-power output also dropped sharply during the quarter, reflecting closer scrutiny of new projects under a government crackdown on overzealous developers who failed to do sufficient planning.

China generated 97.9 billion kilowatt-hours (kWh) of wind power in the first three months of the year, up 39% from a year earlier, according to data published by the National Energy Administration (NEA) on its website (link in Chinese).

Over the same period, the country added nearly 4 megawatts (MW) of wind power capacity, bringing the country’s total to about 168 MW, the agency’s data showed. During the quarter, generated power that went wasted due to inability to connect to the national grid totaled 9.1 billion kWh, down by about a third from a year earlier.

The NEA commended the provinces of Yunnan, Fujian and Sichuan for posting utilization rates of their wind power farms that were sharply higher than the national average.

Chinese developers of wind- and solar-power plants have embarked on an aggressive building spree over the last decade, cashing in on government incentives as they answered Beijing’s call to wean the country off its traditional reliance on dirtier-burning coal. But poor planning has meant a sizable amount of new capacity cannot be connected to the national grid, resulting in lost investment for some projects.

Last year the NEA gave “red” warning labels to Heilongjiang, Jilin and Gansu provinces and the Inner Mongolia, Ningxia and Xinjiang autonomous regions, meaning no new wind-energy projects would be approved for those areas during the year. It made the move after determining those six had unacceptably high rates of wasted capacity, led by a waste rate of 43% for Gansu and 38% for Xinjiang.

The crackdown campaign helped the country roughly halve the overall rate of wasted power to 8.5%, which was down by 8 percentage points from a year earlier.

The latest NEA data showed that Xinjiang and Inner Mongolia had the worst rates of wasted power generation during the first quarter, at 21.6% and 21.3% respectively. They were followed by Gansu, with a wasted rate of 19.5%.