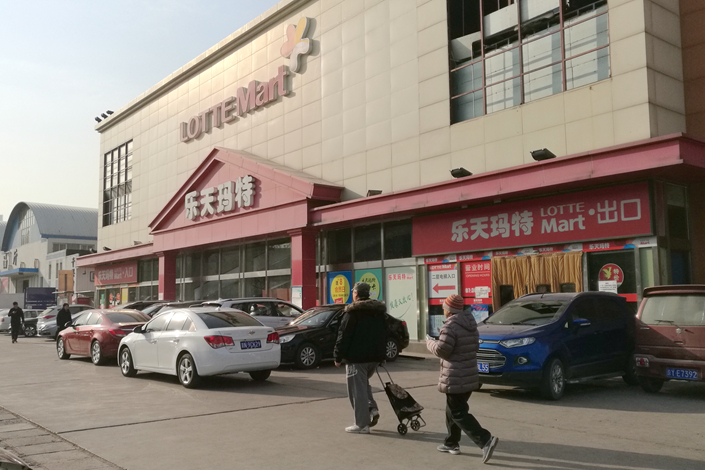 A Lotte store in Beijing on Dec. 23. The sale of its eastern China stores follows the disposal of the Beijing ones. Photo: Wu Gang/Caixin

A retail unit of South Korea’s Lotte Group has decided to sell its struggling stores in eastern China to a local Chinese retail company, the latest fallout from the controversial deployment of an anti-missile defense system in the firm’s home country.

The buyer, Shanghai-listed Liqun Commercial Group Co. Ltd., said in a Saturday filing (link in Chinese) that it would pay 1.67 million yuan ($263 million) for 15 Lotte properties and 72 Lotte stores in eastern China.

The date of the handover will be determined by progress in regulatory approvals, the company said.

This is the second confirmed sale of Lotte hypermarkets in China since the company put them all up for sale last September. In late April, the Korean company announced it would sell a majority stake in its Beijing stores to Chinese rival Wumei Holdings Inc. for 248.5 billion won ($230 million).

Lotte’s difficulties in China started after it allowed the South Korean military to deploy a U.S. Terminal High-Altitude Area Defense (THAAD) anti-missile system on a golf course it owned in response to the increase in nuclear weapon and missile testing by North Korea last year. Beijing strongly opposed the deployment of the THAAD system on security grounds, arguing its highly accurate radar could spy on mainland Chinese military activities. Chinese citizens protested by refusing to shop at Lotte stores in China, while local Chinese authorities significantly increased their safety and sanitation inspections of Lotte facilities.

Lotte’s sales in China plummeted amid the backlash, with its hypermarket revenues down nearly 77% to 263 billion won last year. The parent company’s operating loss almost doubled “due to the continuation of the THAAD missile issue in China,” Lotte said.

Lotte is not the only South Korean retailer that suffered from the controversy. Convenience store operator E-Mart Inc. closed six of its seven China stores last year. The last E-mart store was shuttered in January, but the company decided to discretely maintain a presence in the Chinese market with the help of its Dutch partner, Spar International, which agreed to sell some E-mart goods in its supermarkets, including those in China.

Automaker Hyundai reported that its second quarter 2017 sales in China dropped 64% compared to the year-earlier period in response to THAAD protests. Many Chinese tours by Korean entertainers were cancelled last year and Chinese group holiday tours to South Korea were banned outright for a time.

The THAAD deployment remains controversial, with protests continuing around the former golf course in the southeastern part of the country. Last month, protesters sought to block construction crews and equipment from entering the site to upgrade living quarters for the soldiers manning the THAAD batteries.