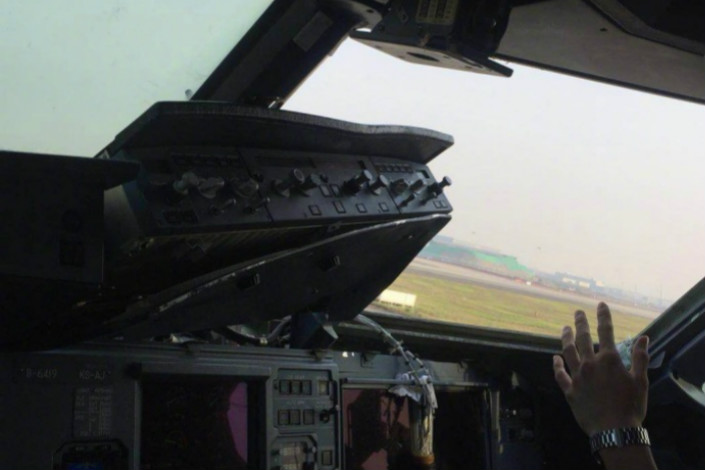 Several instruments in the cockpit ofSichuan Airlines flight 3U8633 were damaged after one of the cockpit’s window broke off in flight on Monday. Photo: Aviation Tale

A Sichuan Airlines flight had to make an emergency landing on Monday after the cockpit’s windshield broke off at 32,000 feet, causing a co-pilot to be sucked partially out of the plane.

The co-pilot and another crew member, who suffered minor injuries, were the only people among the 119 passengers and nine crew members who got hurt in the incident, according to Sichuan Airlines’ account on the social media platform Sina Weibo. The plane landed safely.

Flight 3U8633 took off at 6:26 a.m. from the southwestern city of Chongqing, according to flight-tracking website flightradar24.com. The plane climbed to a cruising altitude of 9,800 meters (32,150 feet) before it abruptly descended to 7,200 meters and turned from its original destination of Lhasa in the Tibet autonomous region.

The flight instead made an emergency landing at Chengdu Shuangliu International Airport at 7:42 a.m., according to the airline’s statement.

In an interview with the Chengdu Economic Daily newspaper, the pilot, Liu Chuanjian, said there was no warning before the windshield blew out.

“Without any sign, the windshield blasted open with a huge bang,” Liu said. “When I looked over, the co-pilot’s body was hanging halfway out of the window.”

Fortunately, the co-pilot was held in by his seat belt, Liu said.

Lu said it became extremely difficult to fly the plane because many objects were flying around the cockpit, many instruments were malfunctioning, and the noise was deafening. It was impossible to hear anything on the radio, and it was difficult to see more than a few meters ahead, Liu told the newspaper.

The pilot said he had to manually operate the plane. It took Liu about 20 minutes to make an emergency descent from 32,000 feet to 24,000 feet and then land in Chengdu.

According to a video footage posted by a passenger named Yu Zubing, who said he was on the flight, oxygen masks dropped down in the plane, which appeared to be flying smoothly. The passengers who wore masks appeared quiet with solemn expressions. Some looked a bit nervous.

Chinese internet users applauded the pilots for their heroic landing.

“It could be the most challenging emergency operation and landing of the last few years,” a blogger specializing in aviation wrote on Weibo.

“Such accidents are rare,” an employee of an airline’s emergency department told Caixin.

There are many possible causes for a cockpit window to break, including improper maintenance or airplane defects. More details will be provided after the Civil Aviation Administration of China completes an investigation, the employee said.

According to Variflight, an aviation data provider based in China, the aircraft was an Airbus A319 that had been in service for about seven years.

Similar accidents have occurred in the past. In 1990, a British Airways pilot survived after he was partially sucked out of a plane at 23,000 feet when a cockpit window was lost, according to Reuters.

In April, a woman on a Southwest Airlines flight died after her upper body was sucked out of a shattered cabin window at 32,500 feet, Reuters reported.