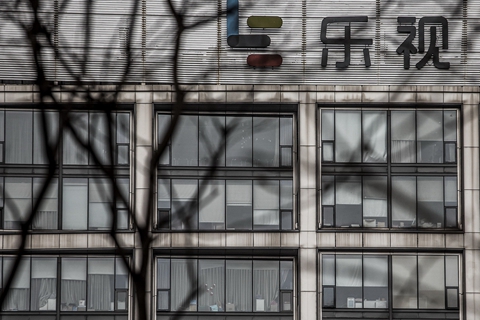 The Shenzhen-listed unit of debt-ridden conglomerate LeEco warned Monday that it could face a trading halt and possibly an eventual delisting if it posts net losses resulting in negative net assets this year.

Leshi Internet Information & Technology Corp. issued the warning after the Shenzhen Stock Exchange sent the company 33 questions Wednesday, including an inquiry about whether its assets are at risk of turning negative, triggering a stock trading suspension and possible delisting.

Under the exchange’s rules, a year of negative net assets would result in suspension in share trading, with two years ending in delisting. If suspended, the company would have to issue its annual report on time the following year, return to positive net assets and have an audit report issued without any reservations before it can apply to resume trading.

On April 20, the unit changed its name from New Leshi Zhijia Electronic Technology Co. to Lerong Zhixin. Leshi didn’t disclose the reason for the name change, but the new name drops Leshi’s name and adds a character from the Chinese name of its major investor, Sunac China Holdings Inc. Sunac held a 33.5% stake in New Leshi Zhijia before the latest investment, following Leshi’s 40.31%.

Property developer Sunac came to the rescue of LeEco last year after the company suffered a cash crunch in late 2016 that resulted in authorities freezing billions of yuan in assets. But Sunac Chairman Sun Hongbin in March acknowledged that his $16.8 billion investment in LeEco was a “failure,” though he remains optimistic about the TV unit.

After the new investments, Leshi’s stake in the TV unit was diluted to 33.49%, though it remains the largest shareholder.

LeEco’s separate 18% stake in Lerong Zhixin is still frozen by the courts, and parts or all of it would go through an auction process to repay the parent company’s debts, Leshi’s board secretary Zhao Kai said Monday. Zhao warned that Leshi could lose its controlling shareholder position in Lerong Zhixin, which may further erode Leshi’s earnings.

Leshi’s stock tumbled more than 7% Monday on the news.

While reporting its first quarter results, Leshi said it was still seeking repayment of debt from LeEco founder Jia Yueting and related parties by all means, though no material progress has been made.

Jia has stayed in the U.S. most of the time since mid-2017, citing his focus on his electric car business Faraday Future. He has defied authorities’ orders to return to China to repay the mounting debt owed by various units of LeEco.

Leshi has been fighting damage to its reputation caused by the parent company’s debt scandal, but debts from related parties and deteriorating financing conditions have caused a severe cash shortage for the company, Leshi Chairman Liu Shuqing said.