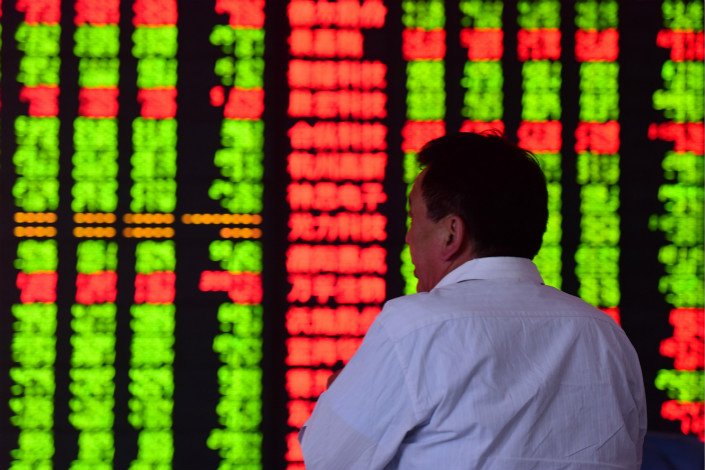 An investor watches stock data at a securities business hall in Fuyang, Anhui province on May 11. Photo: VCG

Global index giant MSCI Inc. has announced which of China’s A-share companies will be included in some of its widely tracked equity indexes, a move that will result in billions of dollars of new inflows into Chinese mainland stocks.

A total of 234 A-share companies with an inclusion factor of 2.5%, which means 2.5% of their total market capitalization, will be added into the MSCI indexes on June 1. The A-shares will represent an aggregate weight of 0.39% in the benchmark MSCI Emerging Markets Index and 1.26% in the MSCI China Index, according to a latest index review released by MSCI early Tuesday. After that, MSCI plans to increase the number of A-share stocks in both indexes and boost the inclusion factor to 5%.

Analysts noted MSCI still might tweak its list of stocks that will be included in the index before June 1.

Although the limited weight of A-shares is little more than a drop in the ocean when compared with the size of the Chinese mainland’s equity market, MSCI inclusion marks China’s grand entrance into global stock benchmarks. The change will immediately benefit the stocks included in the index, which will be bought by funds that track MSCI indexes.

The most heavily weighted stocks slated for MSCI inclusion will be the Industrial and Commercial Bank of China and China Construction Bank , the country’s top two lenders, as well as oil and gas giant PetroChina. Several other well-known companies such as Kweichow Moutai, China’s most famous liquor brand, and leading real estate company China Vanke also made the index. The final list added 11 companies and deleted nine others from MSCI’s initial list of 222 index constituents.

MSCI finally decided to include A-shares in some of its indexes in July 2017 after rejecting them for three years running. Some $11 trillion in global assets are benchmarked to MSCI indexes, the company said. Among them, the MSCI Emerging Markets Index was tracked by funds with more than $1.9 trillion in assets in total at the end of last year.

MSCI said it had refused to include A-shares in its indexes due to China’s capital controls, opaque regulations and the limited access it gave foreign investors to its domestic stock markets. However, starting in 2014, China addressed these problems by launching two stock connect programs that linked the Hong Kong stock market with those in Shanghai and Shenzhen. The programs widened global investors’ access to the mainland stock markets.

On May 1, the government quadrupled the cap on how much investors in Hong Kong could invest in mainland stocks through the links each day.

Some foreign investors are bullish about the inclusion. J.P. Morgan Asset Management, the fund management arm of U.S. investment bank JPMorgan, announced Monday that it will seek a controlling stake of its China joint venture and will double its research coverage of the A-share market to more than 200 stocks over the next 12 to 18 months.

“The inclusion sends a message that global investors can’t afford to ignore onshore China equities anymore,” according to Howard Wang, head of Greater China Equities at J.P. Morgan Asset Management. Wang estimated $6.6 billion passive inflows may migrate to these companies, along with as much as $40 billion in active inflows into Chinese securities.

Stocks in the consumer, pharmaceutical and information technology sectors will benefit from MSCI inclusion, as the weight of those shares has been increased based on the performance of those sectors this year, said Luo Wenjie, executive director of the Quantitative Investment Department at China Southern Asset Management Co. Ltd.