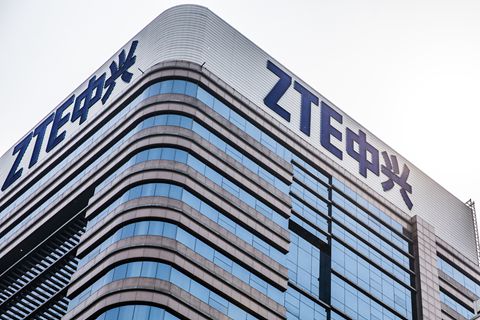 ZTE suspended its main operations after the U.S. Commerce Department banned American companies from selling to the firm for seven years. Photo: VCG

But imposing a penalty for the sanctions infraction is a separate issue from the high-level talks taking place this week in Washington about the roiling trade dispute between the U.S. and China, Ross said.

"The gap remains wide," Ross told journalists during an address at the National Press Club in Washington.

Trump shocked Washington this weekend by pledging in a tweet to help ZTE, China's second-largest telecommunication company, because he said too many jobs in China would be lost.

The company had shut down its main operations after the Commerce Department banned U.S. companies from selling components to ZTE for seven years after it illegally shipped goods made with U.S. parts to Iran and North Korea.

"ZTE did do some inappropriate things. ... The question is, Are there alternative remedies to the ones we had originally put forward? And that's the area we will be exploring very, very promptly," Ross said.

Ross said he expected the issue to be raised this week when top Trump administration officials meet with Chinese Vice Premier Liu in Washington to discuss trade.

"Our position has been that that's an enforcement action separate from trade," Ross said.

The Wall Street Journal reported that Beijing would back away from threats to slap tariffs on U.S. farm goods in exchange for easing the ban on selling components to ZTE, citing people in both countries briefed on the emerging deal.

Two sources, who declined to be identified given the sensitivity of the matter, told Reuters Sunday that China was willing in principle to import more U.S. agriculture products in return for Washington smoothing out penalties against ZTE, but they did not offer details.