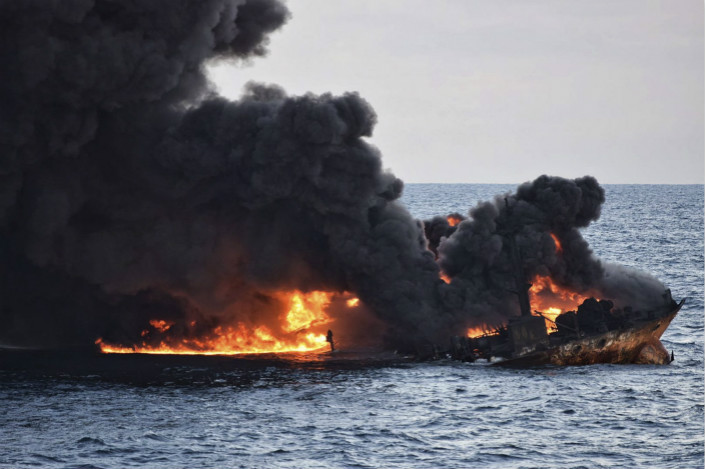 The fire which killed the crew of the Sanchi burned for days after the collison, until the ship sank following an explosion. Photo: IC

Errors by both crews led to the collision of two vessels off China’s east coast in January that killed 32 seamen, according to a joint report viewed by Caixin.

The Panama-registered oil tanker Sanchi, en route from Iran to South Korea, collided with the Hong Kong-flagged CF Crystal about 160 nautical miles (184 miles) east of the Yangtze River estuary at 7:50 p.m. on Jan. 6 when the Sanchi caught fire, killing all 32 crew members, most of whom were Iranians.

The slightly smaller CF Crystal, a cargo ship, was also was damaged, but was towed to a Zhejiang province port and all 21 crew members were rescued.

The new report, produced by maritime authorities from the Chinese mainland, Hong Kong, Iran and Panama, is based on audio and written recordings from both ships. The findings show that each crew neglected to use on-board equipment to gauge the size of the opposing vessel, and each failed to yield in time.

The Sanchi had initially expected the smaller CF Crystal to change course to avoid a collision, before the crew became confused, according to the report.

“Is it (the CF Crystal) a small vessel?” the Sanchi’s third mate asked at 7:47 p.m., three minutes before the collision.

A crew member serving as lookout mistakenly replied, “No, a big one.”

By 7:49 p.m., the CF Crystal still hadn’t changed course, so the third officer on the Sanchi, who was in charge at the time, finally ordered the Sanchi to turn at full throttle — but it was too late.

The fire that killed the Sanchi crew continued for days, after which the vessel exploded and sank off China’s east coast on Jan. 14, leaving a large oil slick. The environmental impact on the surrounding waters, which are close to local fish farms, remains unclear.

The officer in charge of the CF Crystal at the time also perceived the Sanchi to be the smaller vessel until one minute before the collision, when he ordered its driver to manually maneuver the vessel, according to the report.

Crew on both vessels can manually check their on-board automatic identification system (AIS) to assess the size of vessels in their vicinity, according to an industry expert, but apparently crew on both ships failed to do so.

The Sanchi had already had a near-miss earlier the same day when the third officer ignored a radio alert from the captain of a fishing vessel, according to the report.

The fishing vessel changed course and narrowly avoided hitting the Sanchi, according to the report.

The report did not make any recommendations on possible liabilities or punishment for owners of the Sanchi or CF Crystal.