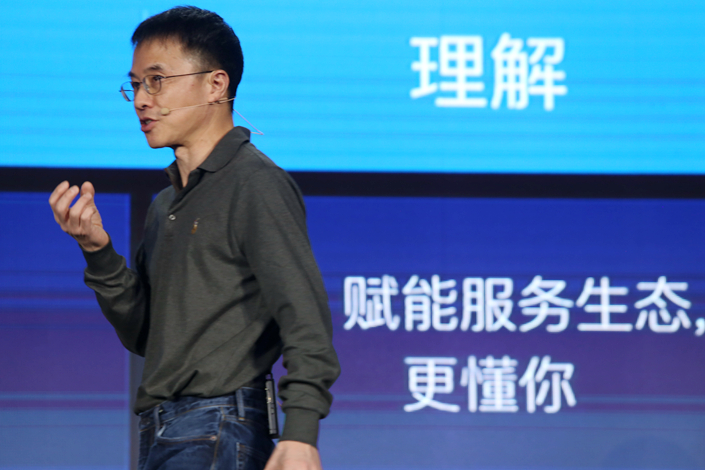 Shares of the Nasdaq-listed Baidu Inc. plunged about 9.5% on their Friday close, the sharpest fall in almost three years, after the search giant announced a key executive will step aside.

Lu Qi, a Microsoft Corp. veteran, can no longer work full-time in China for “personal and family reasons,” according to a company statement on Friday.

Lu also took charge of the spinoff and disposal of various units, including mobile health care, food delivery and on-demand services, as well as handling the listing of iQiyi Inc., China’s version of Netflix.

Lu will remain a vice chairman at Baidu, and the changes will take effect in July.

Lu was “instrumental to Baidu’s transition to becoming an ‘All in AI’ company,” Credit Suisse analyst Thomas Chong wrote in a note. While this strategy will remain unchanged, “visibility is needed about execution” of new initiatives after the personnel reshuffle, he said.

Since Lu’s appointment, Baidu’s shares — which closed at $253.01 after news of his move — have jumped more than 50%, and revenue and net income have both increased, Bloomberg reported.

Lu might have faced internal resistance to his high-profile organizational restructuring and his open communication style, according to Chinese media reports that cited internal sources.

During Lu’s reign, he organized a regular feedback meeting in which employees could raise any issues they had with him face-to-face. The meetings usually lasted for 90 minutes and involved another key manager who would help respond.

“This was a ‘milestone’ change in Baidu’s corporate culture. Such open discussions were impossible before Lu came on board, and he came across as a person who didn’t turn his back on thorny issues and was candid in his answers,” Chinese tech news site 36kr quoted a Baidu employee as saying.

Baidu said it has appointed Wang Haifeng as senior vice president and new general manager of its AI division. President Zhang Yaqin will take on more responsibilities, such as overseeing the firm’s Apollo driverless-vehicle platform.

The search giant has seen a series of corporate personnel shake-ups since last year. Wang Jin, former head of the autonomous-car unit, resigned in March 2017 to set up his own driverless-car venture.

A previous version of this story incorrectly reported the title that Lu will retain at Baidu.