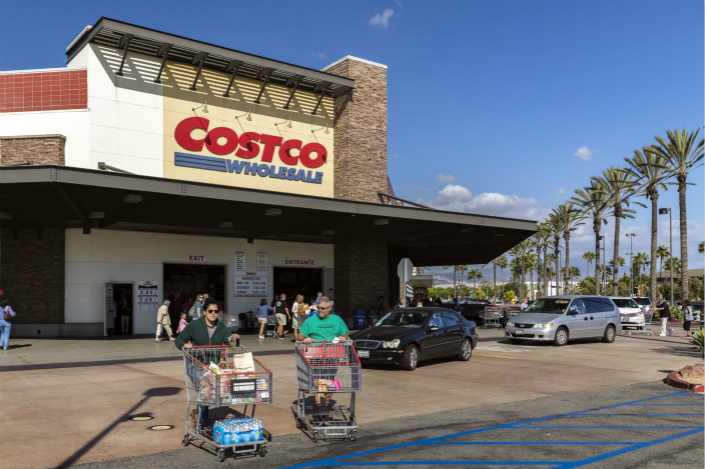 Shoppers leave a Costco store in Irvine, California, in the U.S. on Sept. 22. Photo: IC

* However, experts have questioned whether its business will succeed as country has yet to embrace bulk sales.

(Beijing) — Costco Wholesale Corp. will open at least two Shanghai stores, the retailer’s first physical presence in the world’s most populous country, which it entered with an online store four years ago.

Costco’s first store in Shanghai’s western Minhang district is expected to open in April 2019, a source with the knowledge of the matter told Caixin.

The company held a groundbreaking ceremony in March for the site, which has a planned area of 33,000 square meters (355,200 square feet), including a 1,000-space parking lot, according to the local government-backed media outlet Minhang News.

Earlier this month, Costco signed an agreement with Shanghai Pudong Kangqiao Co. Ltd. to launch another Costco store in eastern Shanghai’s Pudong New Area, which is set to open in two and half years and has a planned area of 20,000 square meters, according to a statement by the district government.

A Costco spokesperson refused to give information on the upcoming stores, citing “company policy to not comment regarding future Costco warehouses” more than two to three months before their opening.

Costco’s model in North America has been based on families buying bargain products in bulk, transporting them home in their cars and then storing them in their relatively large homes. While many Chinese urbanites live in comparatively smaller homes, the company’s online store has been relatively successful.

In October 2014, the wholesaler launched a store on Tmall Global, a cross-border e-commerce site owned by Alibaba Group Holding Ltd. It has since been one of the top 10 Tmall Global stores in terms of sales during every annual “Double Eleven” online shopping festival, according to the Pudong district government’s statement.

But experts have worried whether Chinese consumers will buy into Costco’s bulk sale concept. Zhou Yong, a professor at Shanghai Business School who advises retail information provider Linkshop, said that Chinese shoppers have not embraced warehouse wholesale retail in the past and that Costco will have to create a localized model if it wants to succeed.

Costco’s China subsidiary is named “Kaishike,” which means “open the market to customers.” However its Taiwan entity, established in 1997, is named “Haoshiduo,” which means “a good market with many goods.”

Zhou said that “Kaishike” sounds “weird” and is not as good a name as “Haoshiduo.” However, it remains unclear whether the new name will actually be used on the Chinese mainland stores.

Costco’s expansion into China comes at a time when foreign food retailers have started to rethink the market. Several big names, including British brand Marks & Spencer and Spanish supermarket chain Dia, have quit China. On the other hand, some companies are reportedly preparing brick-and-mortar stores in China, including German discount superstore chain Aldi — which has also been operating on Tmall Global.