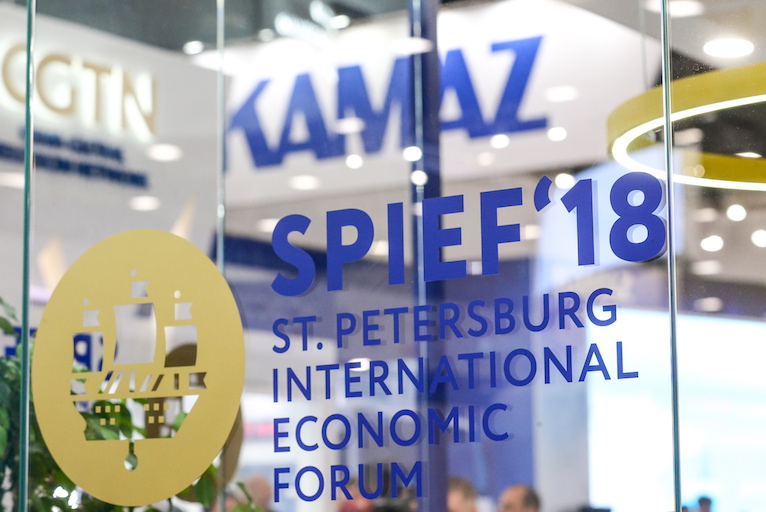 SPIEF logo at the Expo Forum Convention and Exhibition Centre during the 2018 St Petersburg International Economic Forum (SPIEF) on May 24. Photo: VCG

(St. Petersburg, Russia) — China and Russia may soon sign an agreement that will clear a major hurdle to the upgrade of a cross-border railway, a move that could boost the development of Russia’s Far East, a Chinese industry group official said Thursday.

The two governments are expected to ink a memorandum of understanding to adopt the track-gauge standards of both countries along a 70-kilometer (43-mile) stretch of railway that connects Hunchun, a city on the Sino-Russian border, and Zarubino port in southeastern Russia, said He Zhenwei, secretary-general of the China Overseas Development Association (CODA).

He made his remarks Thursday at a Caixin session during the St. Petersburg International Economic Forum 2018 in the city. Track gauge is the distance between the rails.

Russia’s track gauge is wider than most other countries’, including China. The agreement would see extra rails added to the existing line so that trains from both countries can cross the border without having to unload and reload their goods.

The National Development and Reform Commission (NDRC), China’s top economic-planning body, and Russia’s transportation authorities could sign the deal as soon as next month during Russian President Vladimir Putin’s visit to China, said He. The CODA, which is linked to the NDRC, provides services for Chinese enterprises’ overseas investments and development.

Such a change will significantly improve the efficiency of cargo transport on the line and in turn increase the volume of goods transported, He said. It could also set a precedent for the upgrading of another railway between Suifenhe, in Northeast China’s Heilongjiang province, and Vladivostok, he said.

More importantly, the greater flow of goods is expected to drive greater flow of people, capital and technology — all key elements in the implementation of Russia’s strategy to develop its sparsely populated Far East region, he added.

“I believe that will substantially facilitate the overall development of the Far East,” He said.

China is hoping to ship grains, energy and other commodities produced in its northeast to its southern regions via nearby Russian ports as an alternative to domestic rail transport that often struggles with limited capacity during busy seasons.

Jilin province, where Hunchun is, signed an agreement with Russian container operator Summa Group in May 2014 to expand the volume of goods that Zarubino’s port is capable to handle by dozens of times to 60 million tons each year.

He said that the State Council, China’s cabinet, has approved the setup of a new China-Russia development fund that aims to raise a total of 100 billion yuan ($15.7 billion) in 10 phases to invest in major projects such as the Hunchun-Zarubino rail and in the nuclear sector.

But he also cautioned that skepticism in Russia about Chinese investment has hindered the growth of bilateral economic relations.

“We expect Russia to take a more-open attitude in terms of promoting two-way investment,” he said to the audience at the session.

CIC has invested more than $1 billion via a fund it established four years ago in 20 projects in Russia, he added.

Chinese and Russian leaders have jointly set a goal to boost trade between the countries to $200 billion by 2020. However, two-way trade between them reached just over $84 last year, up 20.8% from 2016 and accounting for just 2% of China’s total trade, Chinese official figures showed.