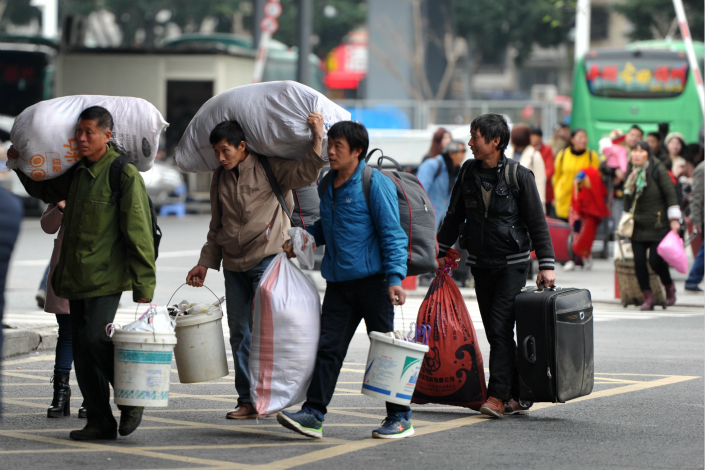 Laden with luggage, often with their belongings stuffed into repurposed plastic sacks that once held some commodity bought in bulk, migrant workers on their way home have for decades been easy to spot at the train stations of major Chinese cities.

However things are changing in this workforce, which provides the manpower that has driven China’s economic transformation.

According to an official report issued by the National Bureau of Statistics (NBS), the average age of migrant workers is going up, more migrants are choosing to stay closer to home, and those who do make it to the country’s biggest cities now aspire to become life-long urbanites with all the privileges that such status grants.

Last year was also the third consecutive year that the average age has risen, with the total number of migrants between the age of 51 and 60 increasing by 4.89 million and the number of people over 60 going up by 2.2 million. There were 4.1 million fewer migrant workers aged 16 to 30, according to an official NBS news website.

“The reason why so many elderly migrant workers have been added in recent years is because employers cannot recruit young migrant workers,” Zhang Zheng, professor of finance at Peking University’s Guanghua School of Management, was quoted as saying in an article published by Chinese news platform Yicai. “Rural areas are not without laborers but looking after their families consumes a lot of labor.”

There are about 40 to 50 million rural people of working age that have chosen to remain at home to care for their children rather than going out for work, Zhang added.

However professor Pun Ngai of the University of Hong Kong’s Department of Sociology, argues that a significant factor contributing to the apparent aging of the migrant workforce is that people are beginning to work later in life. She told Caixin that “the youth now prefer to study further. Before, after finishing high school, they would seek jobs. But now, they will go to vocational college. In the past, a 17-year-old would start to work. But now, they will start working at the age of about 21.”

She also pointed to the declining birth rate leading to a general aging of China’s population as a whole.

In recent years, more and more migrants have chosen to remain close to home, as the gap between the inland, rural areas that have traditionally been the source of most migrants and the richer coastal areas that have been their destination gradually narrows.

While migrants who headed to the east earned 13% more than their counterparts in central or western regions last year, growth in wages in the east slowed to 6.4% in 2017 — down from 21% in 2011 — while wage growth in the western parts of the country has reached a high of 7.5%.

Professor Pun said that many migrants are choosing to move to cities nearer their homes for economic reasons — as the gap in wages is narrowing and the cost of living in eastern cities is higher — as well as for personal reasons, with many migrants coming from single-children families and wanting easy access to their families.

According to a one-off 2016 NBS survey, 70% of migrants want to one day acquire an urban household registration document, or “hukou,” that would allow them and their children to access city public services such as health care and education.

But getting hukou for a major city is still a difficult task, with many long-term migrant workers finding themselves locked out of public services in cities they have lived in for years, often due to their lack of a higher education.

“The reform of the household registration system is now not satisfactory, and there are still difficulties in the settlement of migrant workers,” a representative of the China Democratic League, one of China’s eight officially recognized non-Communist political parties, said in 2017.

According to the NBS survey last year, 38% of migrant workers considered themselves to be “locals” of the city they now live in, up from 35.6% in 2016.

This enduring outsider status affects their children, who must then return to their hometowns to take the all-important college entrance examination, Pun said.

She said it also has a significant effect on their long-term income, as they pay into the local social insurance system but cannot enjoy its benefits, such as medical coverage.

“They give up their youth for the city, but when they leave, they can’t get things back. I think the 20% should be given back, or can be transferred to their hometown as part of their local social insurance,” she said.