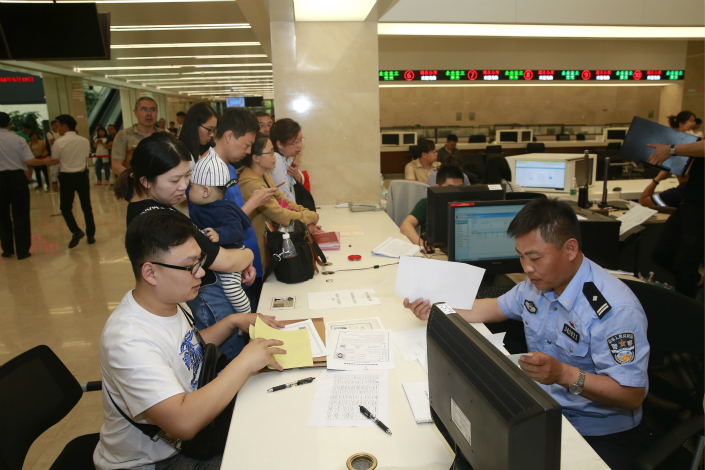 The service hall of the administrative examination and approval center of the Tianjin Binhai New Area, on May 19, 2018. The center will help attract and process new talent for the New Area. Photo: VCG

A “struggle for talent” is gathering momentum in China. Over 20 first- and second-tier cities have announced policies aimed at attracting talent since the start of 2017. The methods they employ fall into similar categories — lowering household registration criteria for newcomers, setting minimum salaries, and offering housing discounts and subsidies. The only differences are in magnitude. The most controversial move so far has been Tianjin municipality’s recent relaxing of criteria for Chinese seeking Tianjin “hukou,” or household registration documents, which led to a mad rush and forced the government to implement cooling measures days later.

Competition between regions has been an important driver of China’s social and economic development over the past four decades. In the past, local governments fought for capital, favorable policies, and resources. It’s fair to think of the current competition for human resources as an “upgrade.” However, this fight for talent has also revealed various problems worthy of deep reflection by policymakers. Local governments must now find answers to the questions of how to better attract and utilize talent.

The battle for talent is a phenomenon of its time, reflecting the many structural changes China is currently undergoing. In terms of the economy, industrial upgrading and changes in the primary, secondary, and tertiary sectors have resulted in increasingly urgent demand for innovation and talent. This is especially so in the high-tech and high-level service industries, where the talent shortage has created a development bottleneck in many regions. In terms of demographics, as the Chinese population ages and migration accelerates, some regions’ populations have already begun shrinking. At the same time, with uneven development across China, stronger regions are getting stronger while weaker regions are getting weaker. Some less-competitive cities are anxious to improve their situation. These complicated factors have combined to create intense competition for talent.

In their rush to attract talent, China’s local governments have fallen into a number of traps, like making promises they can’t keep, or frequently changing policies in reaction to unintended side effects. These problems point to a deeper issue: Existing public administration systems are seriously incompatible with the needs of economic and social development. Although many cities have realized the importance of talent, the systems and mechanisms they rely on have not kept pace with social and economic changes. Attempts to attract talent have exposed deep-seated contradictions in public administration. Additionally, in lowering the criteria needed for settling in their cities, many local governments have opened the door to real estate speculation and skyrocketing housing prices. People are, unsurprisingly, skeptical of policymakers’ intentions: Do they really want to attract talent, or are they simply trying to clear their housing inventory?

Most cities currently competing for talent offer benefits like hukou, discounted home purchases and rental subsidies. These benefits are generous, but it’s not clear how long they’ll last. Actually, although everyone shares these mundane concerns about work and life, what ambitious people value the most is a relaxed and free environment where they can reach their potential. Faced with only material enticements, talented individuals may not choose to settle in any of these cities, let alone take on any long-term jobs there. When attempting to attract talent, local governments should first ask themselves if their existing skilled residents are able to reach their full potential. If local governments focus only on attracting talent instead of utilizing it, and hold on to their outdated policies in other areas, not only will their original residents feel displaced, new arrivals will also inevitably leave after a short stay.

To attract talent, city governments should first change their definition of what “talent” is. In the ongoing battle for talent, cities have targeted highly educated individuals while ignoring less educated but highly skilled workers. This is a strategy that lacks inclusiveness and foresight, and one can’t help but be reminded of some large cities’ much-criticized recent attempts to rid themselves of less “desirable” residents. Although attracting talent and controlling population have different results, both types of action show a similarly distorted view of talent.

Local governments should recognize the fact that it is often harder to find an excellent nanny or a skilled mechanic in many Chinese cities today than it is to find someone with a foreign Ph.D. These less-educated people are crucial to the transformation of the service and manufacturing sectors, and should not be discriminated against or even expelled from cities. In order to continue developing, cities need talented professionals from all levels of every industry who play different roles but complement each other. This creates an organic ecosystem, where talent can evolve. This cannot simply be planned by officials in a conference room.

So far, the problems faced by cities fighting for talent show that policies to attract talent should not be introduced hastily. Cities must first make sure their housing, education, and health care systems are able to cope with the planned changes. Policies should be scientific, feasible, consistent, inclusive, and predictable, and cities should avoid making empty promises and policy flip-flops. Talent attraction should be incorporated into the entire public administration system, rather than treated as a temporary, isolated campaign, in order to avoid conflict or injustice. Long-term real estate development mechanisms should be improved. In the long run, it is more important to develop a platform for talented individuals to realize their potential and put it to good use by continuously improving the policy environment and public services.

The work report of China’s 19th Party Congress called for the country to remove institutional obstacles to social mobility. At the moment, China needs to gradually eliminate inequality between the public service benefits attached to urban and rural hukou by accelerating the reform of household registration, social security, and education systems. The country needs to promote the extension of basic public services to all citizens, on an equal basis, and form a nationwide system that allows for the free movement of talent and the full development of talented individuals. On this basis, local governments can adopt customized guiding policies in order to develop uniquely local cultural, social, and industrial environments, to avoid the current situation of competition between relatively homogeneous cities.

In the early days of reform and opening-up, the spirit of “respecting knowledge and respecting talent” contributed majorly to the Chinese economy’s rapid growth. Now, at a time when the Chinese economy urgently needs to transform, talent has become a prominent requirement for high-quality development. Knowledge, and the talented individuals who wield it, has become the most valuable production factor in the modern market economy. The deployment of knowledge should be decided by market forces. The government can, and should, play a role, but mainly in creating a good institutional environment. The government should not attempt to meddle where it is not needed, but should strive to create conditions conducive to attracting talent.