By Yang Qiaoling and Lin Jinbing 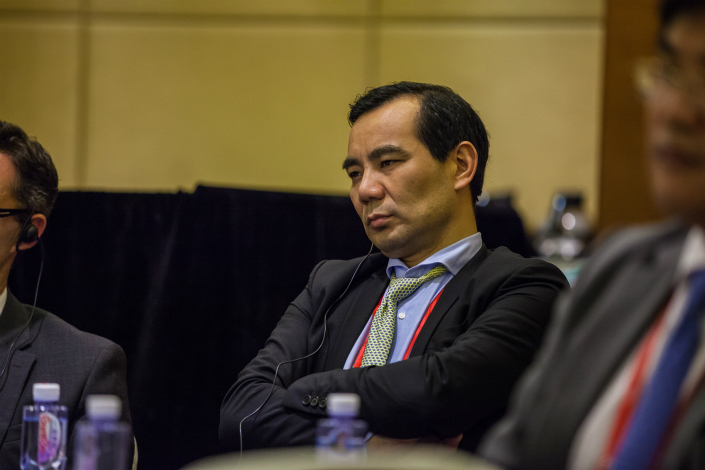 Wu’s appeal was the latest development in one of the most-watched cases involving China’s once-freewheeling financial conglomerates, which the government has attempted to tame to stave off risks to the financial system.

Wu said at the March 28 trial that he “acknowledged and regretted his crimes,” according to a video footage of the trial and a court document.

However, he now says that he is innocent, and is appealing his guilty verdict, said Chen Youxi — a lawyer with law firm Capital Equity Legal Group, who is representing Wu — in a WeChat post on Wednesday.

On May 10, Shanghai No. 1 Intermediate People’s Court sentenced Wu to 18 years in prison for fundraising fraud and embezzlement. The court also confiscated 10.5 billion yuan ($1.64 billion) of Wu’s assets and suspended his political rights for four years.

The Shanghai High People’s Court, the highest court in the city, has formed a panel for the appeal, in which Chen and another lawyer, Li Guifang with Deheng Law Offices, will serve as the defense counsel, Chen said.

At the end of his trial, Wu acknowledged that crimes took place, even though he had initially disputed the charges by pleading ignorance of the law. During the hearing, prosecutors accused Wu of raising more than 723 billion yuan from illicit insurance sales by Anbang’s property insurance subsidiary, Anbang Property and Casualty Insurance Co. Ltd.

The prosecution also accused Wu of swindling investors out of 65 billion yuan of those funds, which was never repaid to Anbang Property.

Prosecutors said Wu transferred 10 billion yuan in insurance-premium income from Anbang Property to other companies that he controlled. The proceeds were used to repay debts and inject capital back into Anbang Property.

Under Wu’s leadership, Anbang transformed itself from an auto insurer with registered capital of 500 million yuan in 2004 to a conglomerate with 2 trillion yuan in assets, including New York City’s iconic Waldorf Astoria hotel.

However, Anbang’s fortunes turned when the police started investigating the insurance giant in March 2017, Caixin has learned.

As soon as Wu learned of the investigation, he ordered Anbang’s senior executives and key employees to flee China or take leave to avoid being investigated, as well as to change their computers and cellphones, delete emails and destroy digital materials, prosecutors said at his trial.

Since regulators took control of the company in February, Anbang has begun to offload assets. Last week, the debt-ridden company said it planned to sell its majority stake in Shenzhen-based Century Securities Co. Ltd. for at least 3.56 billion yuan.

China has increased scrutiny on rampantly growing financial conglomerates in a bid to prevent them from growing “too big to fail” and rein in risky practices that may harm the country’s financial security. Targets have included Anbang, energy and financial giant CEFC China Energy Co. Ltd., and financial magnate Tomorrow Holdings Group.