Update: Beijing Lashes Out at U.S. for Backtracking on Tariff Cancellation

By Fran Wang and Coco Feng 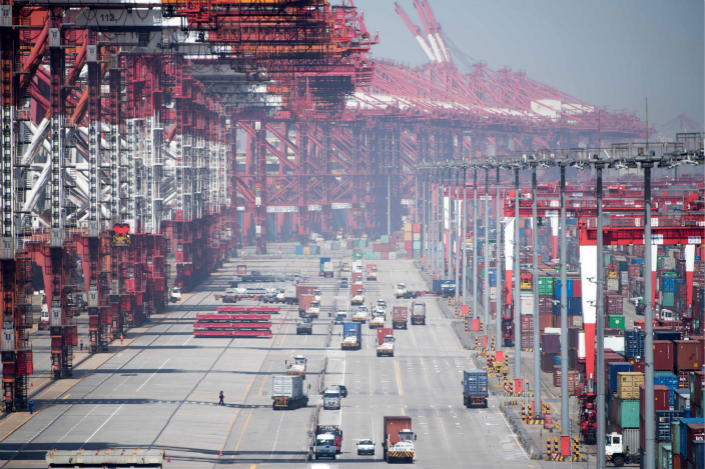 Cargo is loaded and unloaded at Yangshan Deep-Water Port in Shanghai on April 9. Photo: VCG

* Foreign Ministry accuses U.S. of going back on its word, calls on it to meet China “halfway”

(Beijing) — China has said the White House’s backtracking on its promise to call a truce in a potential trade war damages U.S. credibility, with state media blasting President Donald Trump’s administration as “mercurial” and warning that Beijing will defend the national interest “at all costs.”

The U.S. will move forward with its plan to impose a 25% tariff on $50 billion of goods imported from China, after the final list of covered products is announced on June 15, the White House said in a statement issued Tuesday. The country will place restrictions on Chinese investment in “industrially significant technology” in the U.S. and enhance controls of American exports of such goods to China. Washington will also follow up on its litigation filed in March at the World Trade Organization regarding China’s alleged discriminatory practices for licensing intellectual property.

The statement came just days after the two countries’ negotiators announced a pause to a full-blown trade war following their talks in Washington and agreed to “continue to engage at high levels” on relevant issues. U.S. Commerce Secretary Wilbur Ross is scheduled to arrive in China on Saturday for a new round of trade negotiations.

Washington’s going back on its word once again “damages its national credibility,” Foreign Ministry Spokeswoman Hua Chunying said on Wednesday.

“We call on the U.S. to be faithful in keeping its word and meet China halfway in accordance with the spirit of the joint statement” on the truce, she said at a regular news conference.

China’s Ministry of Commerce late Tuesday described the White House statement as a “tactical” move against the agreement reached in Washington.

“Whatever measures the U.S. will introduce, China is confident, capable and experienced in safeguarding the Chinese people’s interests and our national core interest,” an unnamed ministry spokesman said in a brief statement (link in Chinese).

State media had a harsher response to the U.S. announcement.

“The U.S. backtracking, regardless of whether it was intended to bolster the nation’s position in negotiations, win support from domestic voters, or to achieve other ends, is a wayward move that undermines the country’s credibility and will plunge the U.S. into an even more embarrassed and passive situation in international affairs,” it said in a commentary.

It urged the Trump administration to refrain from moving on a whim and “demonstrate sincerity” to negotiate a solution to trade disputes in a “pragmatic” manner.

“We hope the U.S. will stop acting on impulse. But we will not be afraid if the U.S. takes a tough line,” it said. “China will firmly defend the interests of the country and its people at all costs.”

Last month, China announced it would impose a new 25% tax on American products, including soybeans, cars and chemical goods. The move came hours after the U.S. unveiled a preliminary list of $50 billion in Chinese products that would be subject to its proposed 25% punitive tariff for alleged unfair trade practices. The Ministry of Commerce said then that its policy would become effective “pending the implementation of additional tariffs on Chinese products by the U.S. government.”

The Global Times, a tabloid owned by the People’s Daily, the ruling Communist Party’s official newspaper, warned the U.S. of an “epic trade war” if it does not change its stance on the tariffs when Ross arrives in Beijing in a few days.

“The world faces an extremely mercurial White House administration,” it said in an editorial, pointing to Trump’s pullout earlier this month from a deal to reduce Iran’s ability to make nuclear weapons, his decision last year to exit the Paris Agreement on climate change, and his “back and forth” position on a summit with North Korean leader Kim Jong Un.

Analysts believe the tariffs that China and the U.S. have threatened to impose on each other would have only a limited impact on their economies, as well as global growth.

However, the U.S.’ taxes and investment restrictions underscore a growing rivalry between the world’s two biggest economies and could have “serious long-term implications,” especially for the technology sector, Louis Kuijs, head of Asia economics at research firm Oxford Economics, said Wednesday.

“The US wants China to halt what it sees as unacceptable policies and practices in industrial policy and technology transfer,” he wrote in a note. “But China sees its technology and industrial policies as fundamental to its growth and development strategy for the coming decades. And it is thus hard to see China’s leadership committing to significant changes on this front.”

“Overall tariffs are very blunt instrument to address very serious and very complex problems and for trade investment relationships,” Lester Ross, chairman of the policy committee of the Beijing-based American Chamber of Commerce in China, told reporters at a briefing on Wednesday.

However, Ross downplayed the significance of the announcement, calling it “fundamentally a negotiating step.”

“So it’s an ongoing series of moves and counter moves and so forth. It will not necessarily affect the overall sentiment” of American companies on the Chinese investment environment, he said.