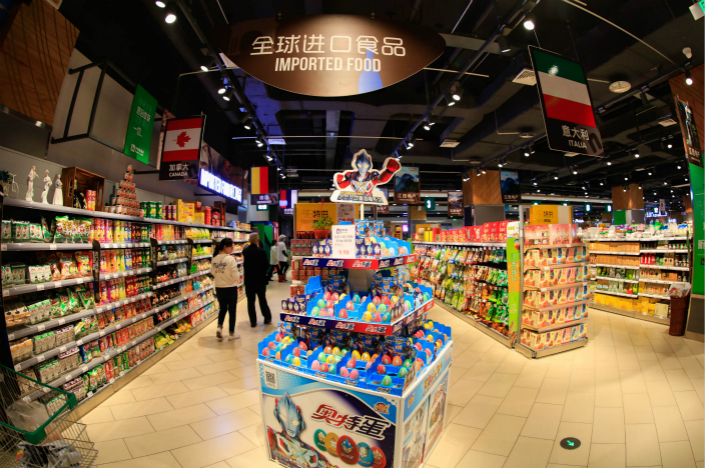 Consumers browse imported goods at a mall in Nanchang, Jiangxi province on May 15. Photo: VCG

* The average import tariffs for apparel, footwear, headgear, kitchenware and fitness products will fall to 7.1% from 15.9%

(Beijing) — China will cut import tariffs by more than half on a wide range of consumer goods starting in July, aiming to boost domestic consumption as an economic growth driver and help to balance its foreign trade amid heightened tensions with the U.S.

From July 1, the average import tariffs for apparel, footwear, headgear, kitchenware and fitness products will come down to 7.1% from 15.9%, while those for washing machines and refrigerators will drop to 8% from 20.5%, the State Council, China’s cabinet, said in a statement (link in Chinese) issued Wednesday after a regular meeting led by Premier Li Keqiang.

The country will also cut import duties on processed foods including aquaculture and fishing products and mineral water to 6.9% from 15.2%, and reduce tariffs on inbound cosmetics, such as skin and hair care products, and some medical and health goods to 2.9% from 8.4%, it said.

The policy is aimed at “opening up further, meeting public demand, and forcing (domestic producers) to improve their product quality and upgrade,” the statement said.

The large reductions came after the U.S. on Tuesday renewed a threat to impose hefty tariffs on $50 billion of Chinese goods to punish the country over alleged unfair trade practices, despite the two governments’ agreement last week to call a truce in their potential trade war. A key issue fueling bilateral trade tension is China’s massive surplus with the U.S., which last year stood at $375 billion, according to American figures, and $276 billion, according to Chinese data.

A 50-strong American delegation arrived in Beijing Tuesday for a third round of talks to defuse the spat, China’s Ministry of Commerce has said. Those talks will culminate with the participation of U.S. Commerce Secretary Wilbur Ross starting Saturday.

Although the affected products are not major U.S. exports to China, the tariff reductions were still regarded by some as a gesture from Beijing to show it was taking steps to address foreign trade imbalances in a multilateral way against the backdrop of a globalized economy.

“China wants to reduce its trade imbalance with the U.S. through efforts by both countries. Meanwhile, it also wants to uphold globalization and free trade and promote the idea of multilateral trade balance, instead of bilateral balance,” Chen Xingdong, chief China economist at BNP Paribas, told Caixin.

China hopes to resolve at least part of its trade dispute with the U.S. within the framework of the World Trade Organization (WTO), and therefore its policy needs to take into account the global picture and benefit more WTO member states than just one, he added.

Throughout the latest trade tensions with Washington, China has repeatedly stressed the need to tackle such trade imbalances within multilateral frameworks and cautioned against a bilateral approach.

The reduction in consumer goods also fits in with China’s six-year-old campaign to transform the country’s growth model to a more sustainable one that is driven by consumption, instead of government-led investment and exports.

Last month, top leaders at a meeting of the Politburo, a key decision-making body comprising the Communist Party’s 25 most senior officials, called for action to “continuously expand domestic demand” as the trade spat with the U.S. dampened the outlook for China’s exports.

The government is also seeking to help the country’s industry move up the value chain and take the lead in advanced technology through programs such as “Made in China 2025,” which is another sore point in trade relations with the U.S.

Chen said the import tariff reduction was also intended to add pressure on domestic consumer goods-makers to strengthen their competitiveness. “Increased imports will force domestic companies to upgrade,” he said.

China has accelerated efforts to lower tariff barriers this year amid ongoing Sino-U.S. trade tensions. The Ministry of Finance announced last week that starting July 1, duties on 135 types of imported cars will be reduced to 15% from previous rates of as much as 25%. Taxes on 79 types of auto parts will be reduced to 6% from as high as 25%.

In April, the State Council also decided to eliminate tariffs on imported cancer drugs from the beginning of this month.