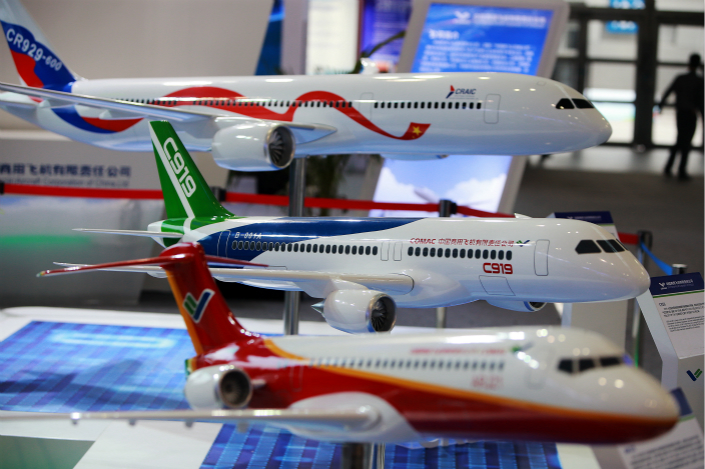 Models of the COMAC C919 and other large domestic aircraft were on display at an exhibition in Fuzhou, Fujian province, on April 24. Photo: VCG

News of the purchase came as part of a wider announcement of a joint strategic partnership between the companies, announced in a joint statement released on Saturday (link in Chinese), that will allow COMAC to take advantage of HNA’s global airline network, primarily through flagship carrier Hainan Airlines. No overall value or purchase timeline was provided.

HNA Group also owns several smaller domestic and foreign carriers that are also likely to be of strategic interest to COMAC as it looks to expand abroad. The joint release highlighted the potential for greater cooperation in Africa, particularly through Ghanaian carrier AWA Airlines, in which HNA has a stake.

The announcement of the partnership comes after a period of substantial pressure for HNA Group, which faces an ongoing clampdown from Chinese regulators concerned by its earlier debt-fueled global-asset buying spree that once made the company the face of extravagant outward investment.

High-profile purchases included that of a $6.5 billion stake in hotel giant Hilton Worldwide and a $6 billion purchase in high-tech parts distributor Ingram Micro. By the end of 2017, HNA Group had racked up debts of 737 billion yuan ($114.8 billion), with its debt-to-asset ratio reaching almost 60%.

The company this year has undergone an almost equally dramatic divestment spree, selling more than 90 billion yuan of assets from some of its highest-profile deals in a bid to reduce its debts. The divestitures include investments in domestic property projects, land plots in Hong Kong, and stakes in aviation, hotel and financial assets. In April, Hainan Airlines announced the sale of part of its stake in Brazilian airline Azul SA to a subsidiary of United Continental Holdings Inc. for $138 million.

The announcement of the partnership with COMAC brings HNA Group more in line with the Chinese government’s priorities. The release noted that the development supports both the Belt and Road Initiative outward expansion strategy, as well as “Made in China 2025,” through which China aims to develop its advanced manufacturing industries.

As China’s first domestically produced passenger jet, the C919 has particular symbolic value in the realization of this aim. The plane is designed to be the peer of the Boeing 737 and the Airbus A320, made by the two companies that dominate the aircraft market.

Until now, COMAC has received 785 orders for the C919 from 27 customers, though most are domestic airlines and lessors, according to the company.

A key challenge facing COMAC will be to receive the approval from the Civil Aviation Administration of China that confirms the C919 is airworthy, a process that may take about four years, according to the company. Over 102 C919s were due to be handed over for air worthiness tests in March.

In May, COMAC announced that it had received bids from seven foreign and local manufacturers aiming to supply the engine for its first wide-body plane, to be jointly developed with Russian partner United Aircraft Corp. and scheduled for launch as soon as 2025.