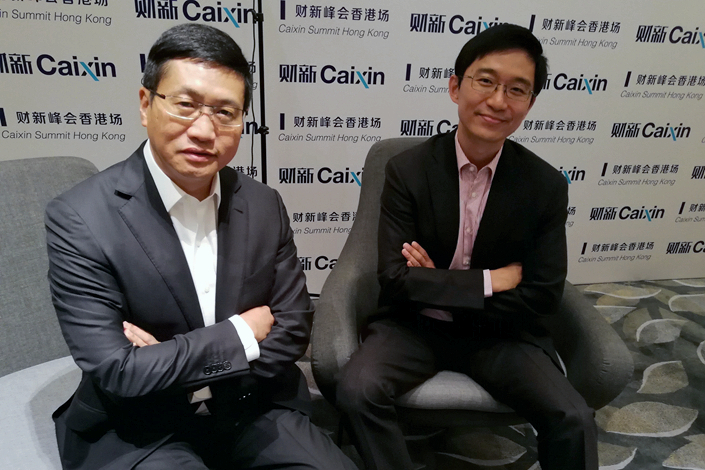 ZhongAn Online Property & Casualty Insurance Co. Ltd., the online-only insurer backed by China’s top two internet companies, is looking overseas and at beefing up its software sales as it chases its first-ever operating profits, two of its top executives told Caixin on Friday.

The company set up a Hong Kong affiliate at the end of last year, just months after a Hong Kong initial public offering (IPO) that saw it raise $1.5 billion, President Wayne Xu told Caixin in an interview on the sidelines of a Caixin summit taking place in Hong Kong. That international unit now has about 50 employees, a small fraction of the company’s 3,000 employees, with a marketing team focused in Hong Kong and product development staff in Shanghai and Shenzhen.

The company is now talking with regulators and business partners about potential launches in the former British colony for its two main business lines, including sales of actual insurance products and also its own proprietary software that lets insurers sell their products over the internet, Xu said. Such a move would mark ZhongAn’s first baby steps onto the global stage after its high-profile founding in 2013 by internet leaders Alibaba Group Holding Ltd. and Tencent Holdings Ltd. and financial-services giant Ping An.

“For now we’re getting familiar with the market in Hong Kong,” Xu said. “We’re looking at where the demand is, and where our focus should be,” he added, saying current discussions could “optimistically” yield some concrete results by the end of this year.

ZhongAn is among a group of fast-growing, private financial technology (fintech) companies to emerge in China over the last decade, seizing on technology to fuel their rapid growth as Beijing allows private investment into a sector once monopolized by slow-moving state-run banks.

But unlike other fintech firms that have found quick profits in microlending and other traditional banking activities, ZhongAn has yet to earn operating profits due to thin margins for insurance that it typically sells through third-party site operators offering products like travel insurance. The company’s premium revenue rose 75% to nearly 6 billion yuan ($939 million) last year, but it also posted a net loss of nearly 1 billion yuan for the period.

In a bid to move more quickly to profitability, the company is hoping to build up the software sales side of its business, which typically carries higher margins and is less heavily regulated than actual insurance sales, said CEO Jeffrey Chen. He added that operating profitability should come within the next five years.

Chen said the software side of ZhongAn’s business is still very small, but that he hopes to make it a more significant portion of the company’s future revenues.

“We hope this will grow,” he said. “This could become a big profit center.”

Like China’s other fintech companies, ZhongAn’s stock has taken a beating since its IPO in September. The shares now trade about 13% below their IPO price, mirroring similar declines for other financial technology firms after Beijing clamped down on the sector late last year with a wave of new regulation. But whereas most of that regulation was aimed at lenders, ZhongAn has not felt much impact on its business due to its position in the more traditional insurance business, Chen said.