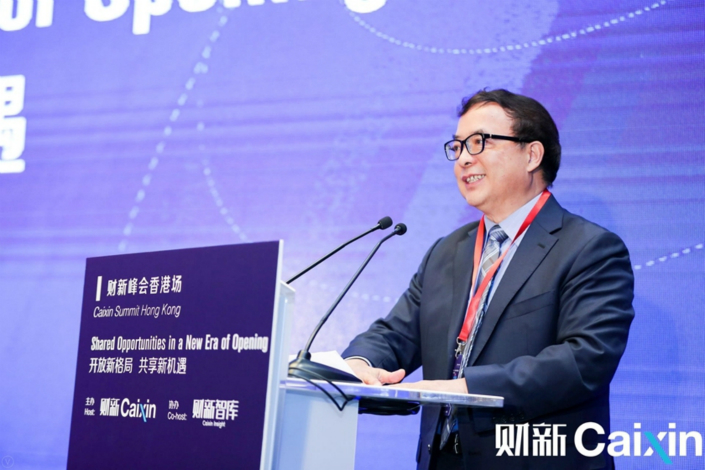 (Hong Kong) — Risks in China’s banking and insurance industries are under control, a deputy head of the regulatory body overseeing the sectors said Friday, adding that authorities will target cross-market financial products and poor corporate governance in the next stage of their deleveraging campaign.

Policies implemented since last summer’s Fifth National Financial Work Conference that directed that funds in the financial system be used to support the real economy have “started to curb disorders” in the financial sector, Chen Wenhui, vice chairman of the China Banking and Insurance Regulatory Commission, said at the Caixin Summit in Hong Kong.

For example, loans granted by Chinese banks in the first quarter of this year soared 11.78% year-on-year while the total assets of the banking sector increased just 7.36%, he pointed out. The data suggest that government policies are forcing lenders to move their off-balance-sheet investments back onto their books so that a proper amount of reserves can be set aside to cover potential losses.

“Next, we will move risk prevention and control into an even more prominent position (among policy priorities) and focus on a crackdown on problems such as poor (corporate) governance and cross-market financial products,” he told the audience.

Regulations on the ownership of financial institutions and on “shadow banking” will be further improved, he added.

Chen also blasted the attempts by some firms to grab stakes in financial firms unscrupulously or expand into multiple financial service businesses simultaneously.

If one company were successful in doing this, “I believe that would be an isolated case,” he said. “It might be due to a particular company leader who has special management skills. But generally, such success is very hard to pull off.”

The government is stepping up scrutiny of the owners of financial firms, including banks and insurers, to stop shareholders, particularly private conglomerates, from amassing hidden stakes and using them to influence operations for their own benefit in ways that could threaten the overall financial system.

In one recent high-profile case, Wu Xiaohui, former chairman of Anbang Insurance Group Co. Ltd., admitted in court to illegally raising more than 720 billion yuan ($113 billion) by selling insurance products without government approval. He was sentenced to 18 years in prison last month for fundraising fraud and embezzlement. The country’s financial regulator took over the company and announced last month that a state-run bailout fund would inject 60.8 billion yuan into it to keep it afloat.

Regulators issued a guidance document in April outlining a strengthening of the supervision of nonfinancial companies that invest in financial organizations. Five companies, including two that are privately owned, have been included in a pilot program the central bank set up in December to simulate a new system for supervising financial holding companies. Sources have told Caixin that regulations governing financial holding companies are finally expected to be rolled out by the end of this year.