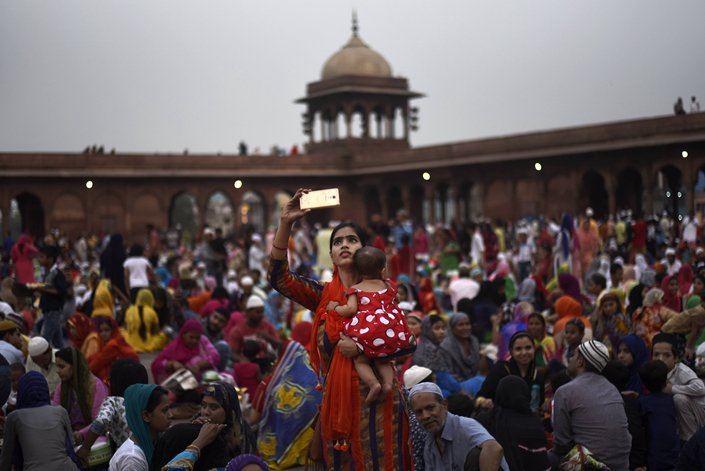 A woman holds her child on June 6 as she records on her mobile phone a gathering in the compound of historical Jama Masjid in New Delhi on the 21st day of Ramadan. Photo: IC

“Do you guys know Jack Ma? How could we reach him? We would really like him to come give a talk.”

In April in Hyderabad, capital of southern India’s Telangana state, a company executive from T-Hub posed the question to a group of Chinese reporters on a field trip to the technology hub.

“People on the Indian startup scene are very much looking forward to meeting him. We want to get his advice on how to build up a technology ecosystem,” he said.

T-Hub is an Indian startup incubator. Its office, reminiscent of an international technology giant, features a nearly 10-meter (33-foot) playground slide and a bell modeled on the one they ring at the New York Stock Exchange. T-Hub rings its bell when managers want to make major announcements to staff.

T-Hub is just one of the many Indian startups eager to tap into technology know-how from China, as its burgeoning scene aims to replicate successful cases for the world’s second-most populous country.

Chinese tech companies have sensed that hunger and have reciprocated by investing an estimated $4 billion in India since 2015, according to preliminary data compiled by Caixin. The wave of investments shows no sign of abating. China has sped up its presence in India, gobbling up stakes in startups and breaking ground for facilities to produce smartphones.

Among the companies are technology giants Alibaba and Tencent Holdings Ltd., handset-makers Xiaomi Corp. and Vivo Corp., as well as up-and-comers such as Jinri Toutiao, a news aggregator, and Cheetah Mobile Inc., a mobile apps creator.

“India currently doesn’t impose much restriction on foreign investment, not to mention the fact that the average age of its 1.3 billion population is only 27 years old,” said Chen Shaohui, Meituan-Dianping’s vice president of strategy. “The young population is a boon to grow our internet business.”

The on-demand services platform in February partook in a $100 million funding round for Swiggy, an online food-delivery startup based in Bangalore, southern Karnataka state. Similar to the Chinese food delivery apps, Swiggy lets customers discover popular restaurants and track their food orders in real time. It boasts being able to deliver food in about 35 minutes.

“India is Alipay’s first leg of globalization. It offers us economies of scale in terms of population and economic growth,” said Chen Yan, who helms Ant Financial’s operations in India. “Mobile subscription fees have rapidly dropped and India’s market size for mobile phones is 200 million units a year. This is a great opportunity to expand our mobile payment services.”

As many as 14 Chinese handset manufacturers have also set up production facilities in India to churn out “made-in-India” phones. That move came after regulators in August 2016 imposed an additional 35% to 40% tax on foreign-assembled phones, on top of the country’s 10% import duty. This compares with a 12% tax for made-in-India phones.

Not to be outdone is Xiaomi Inc., the largest phone brand in India, which unseated formidable rival Samsung Electronics Co. Ltd. in the last quarter of 2017. Together, the brands command more than half of India’s smartphone market.

Xiaomi began building phone factories in India in 2015, and it recently announced it would add three more plants there, bringing its total to six.

The Beijing-based smartphone-maker boasts that “over 95%” of Xiaomi smartphones sold in India are “made in India.”

While tons of Chinese cash has flooded into India’s promising tech scene, observers cautioned that investors have to lay out their strategies and business plans carefully.

Chen said Meituan prefers injecting funds over launching its own business in India, at least for now, because the former model allows it to deepen its understanding of how Indian enterprises work while helping it gradually build a network of business contacts — possibly paving the way for something bigger in future.

“It’s better to be safe than sorry,” said a private equity fund manager. “Most investments in India haven’t made money. It has risks including corruption, a lack of exit opportunities, expensive valuations and the need for the government to play a greater role in supporting businesses.”